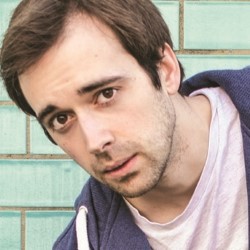 Morally upstanding stand-up and sketches from star of Fringe favourites The Beta Males (Radio 4, Chortle Award nominees). Join the 'excellent' (Sunday Times) Richard Soames for a very public moral crisis as he questions every nice thing he's ever done. There will be tea. 'Hysterical' (Edinburgh Evening News). 'Simultaneously adorable and hilarious' (Spoonfed.co.uk). Praise for The Betas: **** (Times). **** (List). **** (Fest). **** (Time Out). **** (Chortle.co.uk). **** (Metro). **** (Edinburgh Evening News). 'A slick, hilarious show. Genius' (Sunday Times). 'One of the most exciting, gloriously funny acts out there' (Time Out).

Member of the critically acclaimed, Chortle Award nominated sketch troupe The Beta Males, Richard Soames is going alone and Does the Right Thing this Fringe in his hotly anticipated debut solo hour.

Renowned for being the nice guy, Richard faces a very public moral crisis this festival as he questions every nice thing he's ever done, from his teenage endeavours to his misguided adult life choices, he is reliving his wrongs to try to make them right. This is morally upstanding stand-up and sketches with dreams of love, personal confessions and a healthy serving of self-scrutiny. And yes, there will be tea.

Actor, writer, comedian and improviser, Richard's solo acting credits include Made for Each Other (BBC Three) and the award-winning Forget Me Not, a short film which recently received its UK premiere at the London Comedy Film Festival and Palm Springs, as well as several commercials. He also took the lead in the short film Have You Seen Lucinda Jameson? and has recently worked with RSC director Gemma Fairlie in Farce Noir.

Richard was trained in Chicago style long form improv by a Second City alumnus, regularly performing with long-form improv troupe The Bishop and the award-winning improv show Monkey Toast. He is also a guest cast member of both Chortle Award nominated smash hit Austentatious and Grand Theft Impro. He can be heard commentating in smash hit comedy video gaming show McNeil & Pamphilon Go 8 Bit and on Radio 4 as part of The Beta Males Sketchorama, and he is a contributing writer to Radio 4 Extra's Newsjack.