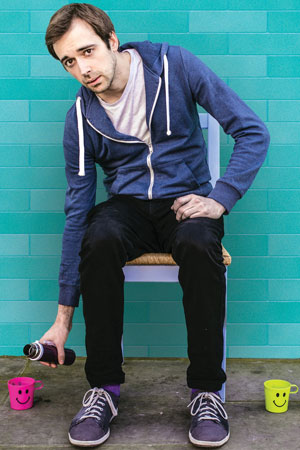 One quarter of sketch performers The Beta Males, Richard Soames tells us about his 2015 solo show.

I've been doing sketch comedy with The Beta Males for 6 years, I improvise with Monkey Toast UK, The Bishop and The Bumper Blyton Improvised Adventure in London and Edinburgh and I do commentary for the videogaming comedy show Go 8 Bit. I've also been in some very good short films by other people and on BBC Three and Radio 4 and stuff.
Am I happy? I guess...yes?! It's odd, this year feels a bit like starting again, so in that sense I've got nothing to show for 6 years of hard work... but in another sense I didn't have that much anyway.
Hooray.

It's a stand-up and one man sketch comedy show about me being a nice person, trying to do the right thing and

You sound like my inner monologue. I think when you're in a sketch group that it's very easy, understandably, to be thought of only in those terms by industry and press. I'm quite keen this year to show my own voice a bit more. Stress-wise though, that has really taken the pressure off - no-one's asking me if it's going to be as good as last year and I'm, so far, not feeling massively frantic. I'm going to try and not read reviews and just enjoy being up there doing a show I like. That's the aim, we'll see if I manage it.

Just trying to do a good show really. I don't really have any gimmicks like that planned, though I might flyer with a Thermos and make tea for people. Bribery usually works.

It's definitely lose this year! I'm trying my best not to think about it, but I've resigned myself to losing quite a lot of pounds. It's an "investment" though...right guys?

I've seen a real fist fight break out in a show and been doing a scene in a Beta Males show when one of them has passed out, but the weirdest and most traumatising experience was probably doing our very tech heavy show in 2012, with lights, sound and projection when, at the most climactic moment possible, the computer did an automatic update and I've never seen sheer, immediate panic in three other men's eyes quite like it. What followed was a combination of scripted dialogue, improvised lines about the Windows operating system, some awful pauses and a lot of screaming.

Well, I probably ought to say the other Beta Males' solo shows - Adam Blampied is Mr Children Man and The Story Beast by John Henry Falle, which are both great - but other than brazen loyalty, I am really looking forward to seeing Joseph Morpurgo, Adam Riches, Pajama Men, Joz Norris, Bucket, That Pair, Bec Hill, Beasts, Nish Kumar and I saw James Acaster in preview who was, as ever, in tip top shape.

If I'm spoiling myself it would be something like: Tim Minchin, Daniel Kitson, Spike Milligan, Pappy's and Cariad & Paul. I imagine the range of styles wouldn't work for the night, but I'd have a lovely time.

Satan. Just because I've heard he's a really bad egg and I think he'd try to put a downer on my day.

Right, well, like I said, I'm a nice person, so I'm not going insist you see it and I'll understand if you don't come, there's plenty of great choice out there (see question 7), but these are the reasons you might want to try...possibly...if it's not too much trouble:
Content - It's stand-up about my struggle to be a nice person throughout my life littered with one-man sketches and tea. Also the whole show is soundscaped, which sounds quite cool doesn't it?
Geography - If you happen to be sitting in my venue at 18:50, why not just stay there for an hour? If nothing else, you'll be out of the rain.
Some People Have Said They Like It - I think it's quite good and some people who aren't idiots have seen it and agree with me. Listening to what other people reckon is a good rule of thumb to decide what shows you want to see once you're up there to be honest. So, if people are saying they like it and they've got zero or limited personal interest, I'd say it's worth a punt.
You Could Win A Billion Pounds - There's no competition or anything, but I guess it could happen, couldn't it? It's unlikely, sure, but let's not rule anything out.