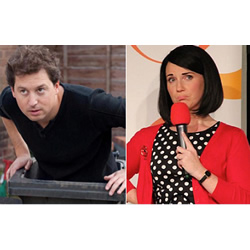 Penella Mellor is not a good grown up. She struggles daily with all aspects of adulthood. Parenting, dating and being nice to other people. She also knows something about Winnie The Pooh that'll make your ears bleed!

Since arriving on the comedy scene she has become a favourite on the circuit and her recent accolades include Leicester Mercury Comedian of the Year (2015 nominee), BBC New Comedy Award (Semi Finals) 2015 and Amused Moose Finalist (2014).

His work has been featured on a wealth BBC TV and Radio shows including Mock The Week, Dead Ringers, The News Quiz, The Now Show and many more.

In 2014 he won the prestigious BBC Radio Comedy Bursary Award; a role previously held by Stewart Lee, Richard Herring and Steve Punt. The same year he reached the Semi-Finals of the Amused Moose and Laughing Horse comedy competitions.