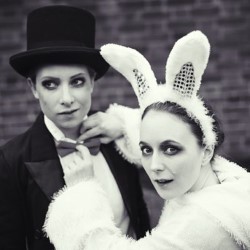 The 2014 Foster's Edinburgh Comedy Award Best Newcomer nominees return with their hotly anticipated second show. Lazy Susan stand side by side, sling on some wigs and take a few long shots at triumph. Watch as they make pacts, shake hands and get drunk on fiction. Character comedy that shoots straight from the hip: come get a slice of the zeal. As heard on BBC Radio 4's Newsjack and Sketchorama. 'Tender and ridiculous' (Guardian). 'Superb ... subtle performances and excellent writing' **** (List). 'Sparklingly funny' **** (Fest). **** (Time Out). **** (TheArtsDesk.com).

Pacts, secret handshakes, routines and attempted flight: this is a show about the life (and after-life) of a double act. Playing bold, soulful characters and taking daring imaginative leaps, Lazy Susan move through time, space and cardboard in their efforts to surprise, delight and keep their act on the road. This is character comedy that shoots straight from the hip: come get a slice of the zeal.

Directed by the 2015 BBC Radio Writer's Prize winner and Royal Shakespeare Company alumnus Christine Entwisle, Lazy Susan are writer-performers Celeste Dring and Freya Parker. They became one of the buzz shows of the festival last year, earning a Best Newcomer nomination as well as much critical acclaim. Since then they have appeared on BBC Radio 4's Newsjack and Sketchorama and have several radio and TV projects in development.

Celeste studied English Literature at Cambridge University and trained in the Meisner technique at the Actor's Temple. She also trained in Chicago style long-form improvisation with Second City alumnus David Shore. Recent acting credits include The Festival of the Spoken Nerd (Radio 4), Max & Ivan's Edinburgh Comedy Award nominated show The Reunion in Edinburgh and The Soho Theatre and Miranda in The Tempest at Cambridge University, ADC Theatre and US Tour. Celeste's recent TV and radio credits include Josh (BBC Three), The Suntrap (BBC2) and Newsjack (BBC Radio 4).