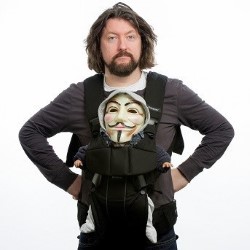 Liberty. Privacy. Comedy. Irish comedian Keith Farnan (Michael McIntyre's Comedy Roadshow) tries to combine these three elements before the first two disappear. Every day, more of our personal data is either given away, acquired in the interest of national security, or sold to the highest bidder. But maybe we don't really need our privacy, so let's start by getting rid of curtains and go from there, shall we? 'Artful, satirical ... with a lightness of touch and a hefty helping of roguish Celtic charm' (Sunday Times).

Every day, we find out that more of our personal data has either been given away, acquired in the interest of national security or sold to the highest bidder, and yet we keep buying gadgets that are happy to share our data with everyone like some blissed out data hippy. But what's the harm if some of our details end up on a database? Who cares if our emails and Amazon wish lists end up on the desk of the NSA? And surely algorithms analyzing words and phrases from our Facebook updates in an effort to profile us into a certain demographic is a good and useful thing. Right? Maybe the future isn't as bad as 1984; maybe this is the future where we get stuff for free in exchange for our personal data. But what about the next generation? Have we sold their privacy in exchange for free Wi-Fi?

Having appeared on BBC1's Michael McIntyre's Comedy Roadshow, Montreal's Just for Laughs, Showtime's Live from Amsterdam as well as Money, Money, Money, his own stand-up documentary for RTE, Keith Farnan has performed at festivals across the world. His Edinburgh Festival shows have proved a powerful mix of the personal and the political and have sold out their runs at the major comedy festivals in the UK as well as the Soho Theatre and Royal Festival Hall in London. Radio appearances include captaining the panel show Bad Language for BBC Scotland, BBC Radio 4's Loose Ends and BBC Scotland's The Guessing Game with Clive Anderson.