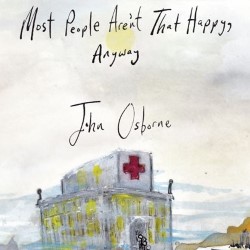 John Osborne has been performing poetry since 2006 at festivals including Glastonbury, Bestival and Latitude. His poems have been broadcast on BBC 6 Music and Radio 1. The creator of John Peel's Shed and Radio 4 regular is in Edinburgh again, this time having a go at his first hour-long poetry show. These poems are a celebration of the gentle magic that punctuates our quiet lives. 'Genius ... a comic highlight' (Guardian). 'A lovely, engaging writer finding the joyous in the everyday' (Stuart Maconie).

After sell-out shows in 2011 and 2012, Radio 4 regular John Osborne comes to Edinburgh with his first ever poetry show. Join him every day for poems that celebrate the everyday life. Kylie Minogue internet dating, his attempts to learn the constellations and wondering what happened to a boy from school who was called Michael Jackson. At 1.30 pm this is the perfect way to start your day of watching shows at the fringe.

WHO IS JOHN OSBORNE?

His first solo show John Peel's Shed was a complete sell out at the 2011 and 2012 Edinburgh fringes receiving five star reviews from The Scotsman and The Independent. It was later adapted for Radio 4, and since then John has written and performed five more half hour Radio 4 comedy specials, including The New Blur Album, The Kindness of Strangers and Valentine's Day, starring Peep Show's Isy Suttie. He wrote the sitcom After Hours with fellow writer Molly Naylor. Directed by Craig Cash and starring Jaime Winstone, Ardal O'Hanlon and John Thomson it will be broadcast on Sky1 in the autumn.

WHAT IS THE EDINBURGH SHOW?

Most People Aren't That Happy, Anyway is a 55 minute poetry show. John has been performing poetry since 2006 at festivals including Latitude, Bestival and Glastonbury. He has had poetry published in The Guardian, The Big Issue and The Spectator and has performed on BBC Radio 3, 6Music and Radio 1.