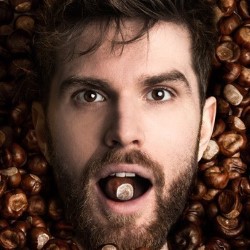 One of the UK's most energetic and charming comedians returns to the Free Fringe this year with his fourth solo show and his hilarious quest to become world champion at... well, literally anything he can claim world championship at.

Joel was recently told by his father "If you don't learn to focus you will never succeed at anything". He took this as a challenge and set out to prove him wrong, swearing "I, Joel Dommett, will focus, and become WORLD CHAMPION at something". But it turns out that it's actually really difficult to become world champion at something. People are really good at stuff. Especially when he becomes obsessed by another possible Edinburgh show idea involving trying to find a beautiful stranger who he fleetingly saw on a train. Apparently he can't even focus on a show about trying to focus.

Joel came onto the comedy scene in 2007 and has never looked back. After receiving great critical acclaim for his debut Fringe hour, he has gone on to appear on numerous television shows; Impractical Jokers (BBC3), Reality Bites (ITV2), Russell Howard's Good News (BBC3), Drunk Histories (Comedy Central), and has performed in acting roles for Popatron (BBC2) and Skins (E4). He has also been the face of MTV, presenting their daily news bulletins, presented the red carpet coverage for EMA's and The Brits, and hosted the Channel 4 after show, Live in Chelsea.