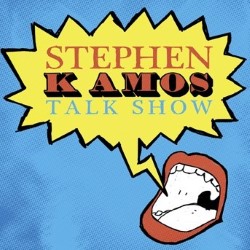 Join festival favourite Stephen K Amos as he chats with guests hand-picked from the worlds of theatre, comedy and music. 'Great variety show featuring a diverse range of performers, gloriously presided over by the immensely funny charismatic host' **** (EdFestMag.com). 'Amos has so much ebullient effervescent good cheer ... there is no such thing as a bad hour in his company' **** (Chortle.co.uk). 'He's so sharp that one day he will cut himself' (Scotsman). 'Provocative, thoughtful and wickedly funny' (Stage). 'Hilarious ... comic genius' (ThreeWeeks). 'Rare charisma' (Independent).

There's a double whammy of Stephen at this year's Fringe, and his second offering Talk Show sees him chat with guests hand-picked from the worlds of theatre, comedy and music.

These guests could be anyone, and come from anywhere, but one thing's for certain: the charm, wit and debonair exuberance of Amos will provide a warm and lush environment for the creatures in his company, who will no doubt provide keen spectators with their finest tricks and reveal - if audiences allow them - insights into how they work best and what, if anything, makes them tick. There will at least be a pinch of gossip, a smattering of banter and a dash of devilish repartee, and that's just from the host himself! And then there's the stories of course. The couch is ready, the stage is set and the seats are warm...the only remaining ingredient is you!

Stephen K Amos has established himself as a household name over the last decade, performing shows at the Fringe every year since 2003 which include the no-holds-barred All Of Me, Find The Funny and The Best Medicine, and performing sell-out dates all over the world.

Amos has eased his way into TV fame with a multitude of credits including The Stephen K Amos Show, The Wright Stuff, Celebrity Great British Bake Off for Comic Relief, Argumental, Live At The Apollo, Batty Man, Mock The Week, The Royal Variety Show and Dave's One Night Stand, and radio familiarity with Just A Minute, Out To Lunch and The Big Night In.