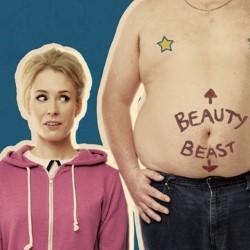 The winner of the BBC New Comedy Award, Chortle Best Newcomer and star of BBC 3's Live at the Electric, Lucy Beaumont presents her hugely anticipated debut show. Spend an hour in Lucy's universe on the north-east coast with her unique blend of surreal, off-beat humour and big, big belly laughs. 'A new voice in stand-up both metaphorically and literally' (Chortle.co.uk). 'She's got the timing of Les Dawson ... an absolute natural' (Johnny Vegas). 'The stage Beaumont is a riot!' (Scotsman). 'A star is born' (Steve Bennett).

Up and coming BBC New Comedy Award winner Lucy Beaumont invites you into her world on the North East coast at Edinburgh Festival this August with her hugely anticipated debut show We Can Twerk It Out, a biographical journey over the last three years of her gigging life. Following the Fringe Lucy will be performing at the Soho Theatre for a string of consecutive dates at the beginning of October.

Lucy's surreal and offbeat humour has seen her enjoy a fast rise to stardom. She has won multiple accolades including the BBC New Comedy Award, the Chortle Award for Best Newcomer in 2012 and she was runner up in the Gilded Balloon's nationwide stand-up competition So You Think You're Funny?

Quickly becoming an established voice on the airwaves as both an actor and writer, Lucy presented her own BBC Radio 4 special in 2013 which was hosted by Johnny Vegas. Her sitcom pilot To Hull and Back was broadcast this June on BBC Radio 2 and is currently being developed in to a full series. Further credits include; The Unbelievable Truth, Dilemma, History Retweeted and The Magical Faraway Tree directed by Johnny Vegas (all BBC Radio 4), The Land of Green Ginger and Baby bird (both Radio 3) and Crush, a 90-minute monologue for Radio 4 which received a Silver Sony Radio Award. Lucy has also performed on BBC Three's talent showcase Live at the Electric.

Lucy was mentored in 2008 by Jeremy Dyson as part of a BBC initiative to find new northern comedic voices; subsequently she went on to write Bananas are Blue, a one-woman play which was produced by Theatre by the Lake and previewed at the Manchester Theatre festival in 2010. Lucy has performed in various theatres and toured nationally and in 2013 was part of The Comedy Zone, the Fringe's longest running and most prestigious new talent showcase at Edinburgh Festival.