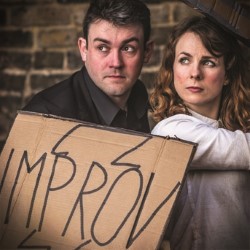 A completely spontaneous improv adventure, taking one word from the audience and immersing them in a bespoke world of bizarre scenes and bold characters. International improv veterans Cariad Lloyd (The Cariad Show, BBC Three; Edinburgh Comedy Award Best Newcomer nominee) and Paul Foxcroft (Drifters, E4) are 'the slickest in the business' (Chortle.co.uk). Join them as they fuse heart-wrenching drama and comedy into a heady mixture of absurdity, tragedy and pure delight. Total sell-out 2013. Book early. 'An improv gem' **** (Edfestmag.com). 'Rivals the best scripted shows ... stylish, funny and imaginative' (Chortle.co.uk).

This completely spontaneous improv adventure takes one word from the audience and explodes it into an hour of comedy, tragedy and absurd delight. Cariad Lloyd and Paul Foxcroft are "the slickest in the business" (Chortle). Total Edinburgh Fringe sell-out run 2013 and total sell out at The Soho Theatre 2014.

These international improv veterans return with their refreshingly different, long-form improv show, with each of them portraying a multitude of characters.

Cariad has appeared in Cardinal Burns (E4), Badults (BBC3) and The Cariad Show on both BBC3 and Radio 4. She was nominated for Best Newcomer in the Foster's Edinburgh Comedy Awards.

Paul, a scriptwriting finalist at Just for Laughs 2011, has appeared in Drifters (E4), written for Canadian TV and radio, and is half of The Times Critic's Choice sketch duo, Surname & Surname.

Cariad is a creator and core member of Chortle Award winning improv sensation Austentatious and both are UK cast of the multi award-winning improvised chat show, Monkey Toast.

They have both improvised all over the world including at the renowned Bristol Old Vic and the Die-Nasty 53 Hour Soapathons.