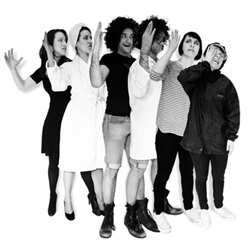 Nathan Dean Williams made his Edinburgh comedy debut in 2010 with Cheeky Beggars Banquet, establishing himself as one of the most talented character comics and poetic storytellers on the circuit. Described by The Fix as 'a filthy, twisted Alan Bennett for the jilted generation', his 2011 solo show The Buffet was a critically acclaimed hit which later transferred to the Soho Theatre. His 2011 Twisted Christmas show was a sell-out success, as was his Halloween show at the Leicester Square Theatre, Nathan Dean Williams gives you...THE WILLIES. He recently appeared in Perrier Award-winner Alice Lowe's new pilot People Place for So Television, and a film collaboration is in development with BFI award-winning filmmaker, Catherine Taylor.

Toby- made up of sisters Sarah and Lizzie Daykin - quickly became an underground cult hit with their 2010 Edinburgh debut show, and their refreshing approach to sketch comedy won them rave reviews once again for their 2011 show Lucky. They have written and performed for Live at the Electric (BBC Three) and have appeared in Anna and Katy (Channel 4), Dead Boss (BBC Three) and For The Win (BBC Three). Sarah will also be appearing in Sky's new sitcom Chickens, written by and starring Simon Bird, Joe Thomas and Jonny Sweet.