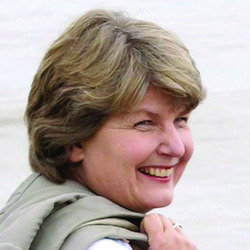 Sandi Toksvig - comedian, novelist, actor, broadcaster, show-off and international treasure returns to the Edinburgh Festival Fringe in 2013 with My Valentine, playing the Pleasance Grand from 3 - 11 August, prior to a UK tour in the autumn.

Long-standing host of Radio 4's The News Quiz and Excess Baggage and regular QI panellist, Sandi will be performing her uniquely witty evening of stand-up, stories and fascinating facts and also signing copies of Valentine Grey after the show.

The show is directed by award-winning theatre and television director and producer Pip Broughton.

Born in Copenhagen, Sandi Toksvig began her comedy career at Girton College, Cambridge University, where she wrote and performed in the first all-woman show at the Footlights. Sandi performed at the first night of The Comedy Store in London and was part of the famous improvisational comedy team, The Comedy Store Players.

She has appeared on a variety of TV programmes including Mock the Week, QI and Have I Got News For You. Sandi is a familiar voice for BBC Radio 4 listeners, as the chair of The News Quiz, and was the main presenter of its travel programme, Excess Baggage.

Sandi's playwriting credits include Bully Boy, which focused on PTSD among British servicemen and premiered at the newly built St James' Theatre in London in September 2012; a musical Big Night Out and Pocket Dream, which transferred to the West End.

Sandi became the chancellor of Portsmouth University in January 2012.

Sandi as also a highly successful novelist and she is also is currently writing several commissions, both drama and comedy, for Sprout Pictures.