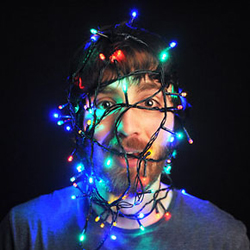 Ian Smith (BBC2's Popatron, Sky's Officially Special) is an award-winning stand-up comedian. Ian (bearded) has developed a reputation as one of the most exciting young acts on the circuit. This is his debut hour about that tricky, restrictive theme, anything. It's a shambling show about childhood, things that have happened, frustration, embarrassment, and things that haven't happened. Bring an extra pair of socks, the ones you're wearing will get blown off (by the comedy). ***** (ThreeWeeks). **** (Scotsman). 'Fantastically funny' (Times). 'Delightfully offbeat writing ... a talent, for sure' (Chortle.co.uk).

Anything is a show about that tricky, restrictive theme; anything. Ian is a natural, likeable storyteller and his debut show is a collection of anecdotes and silliness about embarrassment, frustration, childhood and what, if anything, he has learnt in his life so far. It's a slightly shambling, yet structured, self-analytical hour about things. It'll be a lot of fun.

Anything follows two sell out and critically acclaimed Fringe double headers, Beckett and Smith (**** The Scotsman, The List) and Ian Smith and Tom Toal (***** Three Weeks). Ian is a multi-competition finalist and won 'You Must be Joking' in 2009. He has performed stand-up on BBC Three at the Fringe and done warm-up for series including The Angelos Epithemiou Show and Would I Lie to You. Ian was voted 'Most likely to become a comedian' in his school yearbook.

Alongside his burgeoning stand-up career, Ian has worked on various TV projects including landing lead roles in BBC Two sitcom Popatron and Sky comedy Officially Special alongside Katherine Parkinson (The IT Crowd). Ian also appeared in Kay Mellor's BBC One drama, The Syndicate and BBC Three pilot, For the Win. He has also co-written a short film, Back of the Net! and starred alongside Craig Roberts (Submarine) and Charlotte Ritchie (Fresh Meat) in forthcoming comedy indie-film, Jolene: The Indie Folk Star. He can also be seen in Bonsai, another short that received a special mention in Sundance London's short film competition.