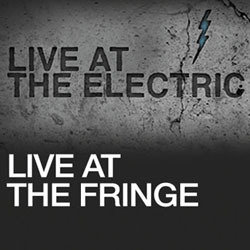 Edinburgh Comedy Award winner Russell Kane hosts a live special of the hit new BBC Three late-night comedy series Live At The Electric. The show features a different line-up of stand-up, sketch and musical comedy each night for a strictly limited run of three nights only.

As a live performer Russell Kane has achieved what no other comedian has managed - winning both the Edinburgh Comedy Award and the Barry Award at the Melbourne International Comedy Festival in 2010, the two most prestigious prizes in comedy - with his stand-up show Smokescreens & Castles. Russell then went on to tour the show around the country and launched his debut DVD of the same show in November 2011 with Universal Pictures UK. Following a sell-out UK tour and the launch of his debut DVD of the same show in November 2011, Russell embarked on a new 59-date tour with the critically acclaimed sell-out show, Manscaping. Alongside Live At The Electric (BBC Three) Russell co-hosts comedy entertainment show Britain Unzipped with Radio 1 DJ Greg James (BBC Three).