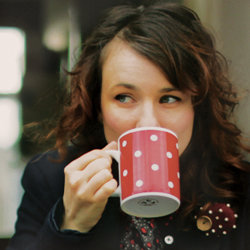 The hit of the Fringe 2011 and Foster's Edinburgh Comedy Newcomer Award nominee Cariad Lloyd returns to Edinburgh with her brand new show, The Freewheelin' Cariad Lloyd, at the Pleasance.

To follow up last year's incredible success, Cariad wants to present a piece of theatre to you: hard-hitting, heartfelt and difficult theatre. Unfortunately she's been listed in the comedy section, so she's had to cut it short. She has, though, found some other performers to fill in the time, so join Cariad, as she returns with old favourite Andrew (the child stand-up), plus brand new joys including Mrs. Lynch (David's mum), Moominmamma (Scandinavian detective), HSBC (Helena Susan Bonham Carter), Joey Béchamel (New Girl) and other bizarre delights.

Cariad made a name for herself on the comedy improv scene, appearing in Showstopper! The improvised Musical, Grand Theft Impro and working with Ken Campbell, as well as performing with the critically acclaimed Austentatious: The Improvised Jane Austen Novel. She was nominated for the Foster's Edinburgh Comedy Newcomer Award for her debut show, Lady Cariad's Characters, performed as part of PBH's Free Fringe and was featured on BBC2's The Review Show. She also received the EdTwinge award for most positively tweeted-about show.

Since then, Cariad has racked up appearances in Cardinal Burns' hit E4 series, as well as writing and performing a number of sketches for BBC Comedy Online. She stars in a forthcoming series for CBBC, and recorded My First Planet for Radio 4, a sitcom starring Nicholas Lyndhurst. Her short film 0507 was nominated for a British Independent Film Award in 2011.