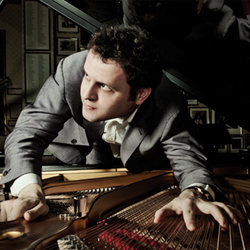 Amateur Transplants front man Adam Kay sits at a grand piano and sings smutty songs. He has had 20 million YouTube hits (including the iconic London Underground Song) and three number one albums in the iTunes comedy charts. Telegraph Pick of the Fringe 2011. 'Genius' (Scott Mills. BBC Radio 1). 'This is a wonderfully funny way to spend an hour - a comedy classic' (Scotsman). 'Filthy at best, depraved at worst - and great, guilty fun' (Telegraph). 'This made me very, very happy' (Stephen Fry).

In the decade since Adam began performing, Amateur Transplants have developed a fan base the size of which most comedians would happily sell their kidneys for. With sell-out tours and Edinburgh Festival seasons, his cutting-edge, darkly humorous re-imaginings of modern day pop and rock classics have gained him a cult following across the UK.

The iconic London Underground Song has been in the iTunes comedy top ten continuously since 2008 and has become an Internet phenomenon with over 7 million hits.

Adam has recorded four albums including Fitness to Practice and Unfit to Practise and a live album, In Theatre. He has been offsetting some of the bad karma caused by all the swearing by donating a proportion of album sales to Macmillan Cancer Support and is proud to have donated in excess of £30,000. The recordings have consistently held Top Ten positions in both the iTunes Comedy singles and albums charts since 2008, and Amateur Transplants YouTube videos have in excess of 20 million total views. The 2010 Christmas Album, Have Yourself A Sweary Little Christmas went straight into the iTunes Comedy charts, knocking Tim Minchin off top place.

Adam writes extensively for TV, with recent credits including Mongrels (BBC3), Watson & Oliver (BBC2), Anna & Katy (Channel 4) and he has spoken at the Cambridge Union and both the Cheltenham Literary and Science Festivals.