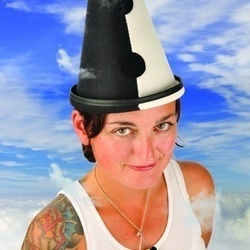 Fresh from the Melbourne International Comedy Festival and as seen on Michael McIntyre's Comedy Roadshow and Mock the Week. If.comedy Best Newcomer nominee and Dave's Funniest Joke of the Fringe winner returns to Edinburgh with a brand new show. Zoe believes the key to happiness lies in expecting less from yourself, enjoying magic fudge and choosing your souvenirs carefully. Just don't leave her unaccompanied in the company of butterflies. 'Always fizzling with indignation and throwing out a hugely enjoyable mix of brutal put-downs and richly funny stories, Lyons has what it takes to delight any crowd' (Guardian).

Zoe Lyons makes a triumphant return to the Edinburgh Festival, after a year's hiatus, for her fourth solo hour show Clownbusting. This show comes fresh from the Melbourne International Comedy Festival where she received rave reviews.

Clownbusting - Zoe has decided to embrace her inner under achiever and keep it cosy and warm in her blanket with sleeves. Sounds so simple doesn't it? But let's be honest it is easier said than done if, like Zoe, you are the sort of person who can become violent when confronted with a souvenir thimble, and you can shove your souvenir teaspoon as well. Why does she lie awake at night worrying that if she ever went to prison she wouldn't use the time wisely and would only be a disappointment to herself? Will those awful flashbacks to the "nudist beach incident" ever cease? And how exactly did she become an accidental drug smuggler?

Last year's touring show Miss Machismo gained her much critical acclaim and her second solo show in 2008 Mangled Mantra Of The Mixed Up Modern Mind gained her a win for Funniest Joke of the Fringe voted by Dave TV, for her one liner: "I can't believe Amy Winehouse self-harms. She's so irritating she must be able to find someone to do it for her..." Germaine Greer was quoted in the Guardian describing the gag as "Astonishingly vicious" - Zoe takes this as a massive compliment!

Her debut solo show Fight Or Flight procured her an If.Comedy Best Newcomer nomination. That same year Zoe was honoured with an invitation to become a patron of Pride joining a select group of luminaries which includes Stephen Fry, Sir Elton John and Sir Ian McKellen.

Her TV appearances have included Michael McIntyre's Comedy Roadshow (BBC One), Mock The Week (BBC Two), The Wright Stuff (Channel 5), Sex Bombs (BBC) and Most Embarrassing Couples (BBC3) amongst others. Radio wise Zoe has been heard in Clive Anderson's Chatroom (Radio Two), 4 Stands Up (Radio 4) and The Vote Now Show (Radio 4). She has also appeared in It's that Jo Caulfield Again (Radio 4) and PMQ with Andy Parsons (Radio 5 Live).