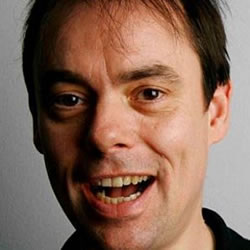 After Big Train, Jam, Nighty Night and Stewart Lee's Comedy Vehicle Eldon has made up his own show. In it he moves about a bit and also talks. Sometimes in a different accent from his own. In one bit he hops up and down. That lasts for about four seconds. Here is what some people have said about him in the past: 'He's over there'; 'He's complaining about the missed recycling collection again'. Why don't you go and see his show? It's about 48 minutes long.