The two films starring 1950s comedy icon Tony Hancock are to be released on Blu-ray, it has been announced.

Brand new restorations have been made of the acclaimed 1961 feature The Rebel, and 1962's The Punch And Judy Man, each from the original camera negative.

The star of BBC radio and television's Hancock's Half Hour reunited with his regular scribes Ray Galton and Alan Simpson for the celebrated classic The Rebel, before dispensing with their services and penning The Punch And Judy Man with his friend and neighbour Philip Oakes.

Initial copies of The Rebel will also include a limited edition booklet containing the entire script of The Day Off, Galton & Simpson's follow-up feature film script, which he declined to make.

Both films will be released on Blu-ray, DVD, and download through Amazon Video, on Monday 30th September. Previously available on DVD only, the new restorations mark their world premiere releases in HD.

Additionally, distributor Network has announced a world premiere screening of the Rebel restoration, to be held at London's Prince Charles Cinema on Monday 23rd September.

Introduced by comedian, comedy historian and Hancock fan Paul Merton, tickets for the screening are now on sale.

He says: "One of the best British film comedies ever made, The Rebel now looks absolutely splendid in its pristine Technicolor. This is no more than this film deserves."

For the audiences of 1961, accustomed to seeing Tony Hancock as a flickering 405-line black and white image, The Rebel must have come as a revelation: there was The Lad Himself, larger than life, on the big screen, in colour. Stone me, who'd have thought it!

Now, in a revelation to modern viewers, The Rebel has been painstakingly restored from the original camera negative, and it looks better than ever; so pristine and clear that it could almost have been released last week. Just don't start looking for errors in the period detail: it really was made in 1960...

As the 1950s came to a close, the career of Tony Hancock was nearing its zenith. With half a decade of successful radio and TV series to his credit it was time to make the move into films, a step that would see Hancock aiming high, with ambitions to make it as an international star. The grandiose ambition of 'The Lad' might well have come straight from the pen of scriptwriters Ray Galton and Alan Simpson, and is certainly reflected in their script for The Rebel. The Hancock persona as seen on screen would have been very familiar to radio and TV audiences: grandiose, but thwarted ambition, followed by the pompous playing-up to his new found fame - and he was afforded plenty of opportunities to deliver the kind of comic routines, facial reactions and vocal nuances that had made him a star.

This rare chance to see Hancock in colour, and against some vivid Parisian backdrops - many shot on location - looks as sumptuous today as it must have done to the cinema audiences of 1960, even moreso in this stunning new restoration. The colour photography is especially suited to scenes such as those at the party of a modern art collector (Dennis Price), whose multi-hued residence would not have looked out of place in an episode of Batman.

Hancock himself is at the top of his comedic game, fresh from his successful run on BBCtv and radio - yet the film is tinged with poignancy at the thought of what might have been, and the tragedy that lay just a few years in the future. When Nanette Newman's blue-lipglossed existentialist asks of Hancock: "why kill time when you can kill yourself?", it's almost an edge-of-the-seat moment as we wait to see his reaction. He considers the remark, before breezily replying: "Yes, it's a point of view. I suppose so."

A true contrarian, Hancock followed up the cosmopolitan Technicolor escapism of The Rebel with a much more muted and low-key character piece. Though The Punch And Judy Man may feel like a step backwards, with its monochromatic look and bittersweet comedy, it is very definitely a companion piece to The Rebel - with which it shares the same themes of individualism, social one-upmanship and a casual disregard for authority. Newly restored in high definition from the original 35mm camera negative, The Punch And Judy Man hasn't looked this good since its original cinema exhibition in 1962.

Clearly under the influence of the British New Wave, still just about in vogue when the film went into production, and physical character comedians like Chaplin and Tati, Hancock dispensed with long-time writers Galton and Simpson and wrote the script himself, along with broadcaster Philip Oakes (then Hancock's neighbour and, latterly, biographer). As neither were trained scriptwriters, the resulting tale of seaside Punch and Judy man Wally Pinner strikes a somewhat uneven balance between bittersweet comic drama and the more conventional type of droll character comedy for which Hancock had become famous. Without Galton and Simpson's influence Hancock has free reign to pursue his quest of realism, a quality that he felt - not without some justification - to have been lacking in some of his earlier work.

Shot in scintillating black and white by BAFTA award-winning cinematographer Gilbert Taylor (who would go on to be Director of Photography on a little thing called Star Wars), The Punch And Judy Man is a much riskier proposition than The Rebel - which was on rather safe ground and riffed its plot on the much-lauded Poetry Society episode of Hancock's radio show. Its mixture of low-key, character-driven humour, meandering plotline and occasional slapstick create a comedy that's altogether more challenging and somewhat bleaker than anything Hancock had done previously.

The opening scenes are very low-key indeed. Viewers with long memories may spot the conflation of radio programme schedules as Hancock dresses in his bedroom to the accompaniment of weekday staple Housewives' Choice - which is followed by a very recognisable Saturday Club. This leads into a near mute breakfast table scene, intended to convey the stasis into which Wally's marriage to Delia (Sylvia Sims) has collapsed. The first big laugh comes as he vents his frustrations by inserting a small posy of flowers into the backside of a china pig. But scenes such as this are few and far between in a movie that, like its central character, drifts along for the most part in an amiable, if unfocused, fashion.

The film's most celebrated and best remembered scene is also its longest: finding himself in an ice cream parlour in the company of an amiable urchin, Wally orders exactly the same ice cream confection as the lad, and proceeds to follow his every move as he attacks the gargantuan confection (Hancock is reputed to have cleansed his palate with vodka between takes). The blossoming relationship between the two characters looks as if it's going somewhere, but is not pursued beyond this sequence. Instead, the almost plotless script gravitates towards a climactic gala ball celebrating the 60th anniversary of Piltdown-on-Sea, which rapidly becomes a bunfight in the most literal sense.

The supreme irony of The Punch And Judy Man is that its downbeat, provincial mood was exactly what Hancock had been seeking to avoid when he severed his relationship with Galton and Simpson - their proposed script, The Day Off, would have seen his character taking a literal busman's holiday, through a succession of scenes that reads like an early draft of Billy Liar.

The Punch And Judy Man signalled the end of Hancock's ambitions as a film star. Its poor performance meant there would be no further offers of starring vehicles, and his subsequent appearances on celluloid were limited to a couple of cameos in Those Magnificent Men In Their Flying Machines and The Wrong Box. 1968 saw him decamp to Australia to recreate the character he'd spent the last eight years trying to run away from, before he finally took the advice of Nanette Newman's character in The Rebel. 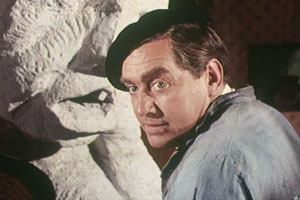 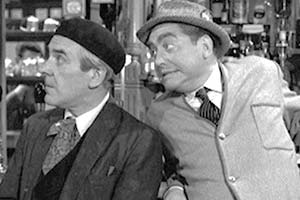