The Midnight Beast are back. Stef, Dru and Ash are a bit older, but no wiser.
Preview clips 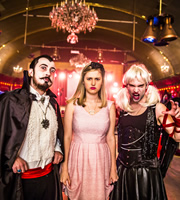 Stef, Dru and Ash are a bit older, but no wiser. Their dreams of a record deal are put on hold, and it's time to go to find work. They get a job in a local ex-Bingo Hall, and their first task is to put on a birthday party for the owner's 16 year-old granddaughter and her friends.

Stef's reeling from discovering his girlfriend Zoe is now his ex-girlfriend, and going out with chart-topping rapper Sexual P. While he works on his own crazy idea for the party, Ash and Dru decide on a Twilight theme. But when everyone turns up the party, it's not exactly what everyone was hoping for.

With three brand new songs, the Broadway-inspired opener I Swear, Stef's gospel number, Black Guy, and Sexual P's hit, 5-A-Day Flex, this episode sees the boys back in the belly of the Beast, along with their eccentric neighbour Sloman, and new regulars, Sylvia the owner of the ex-Bingo Hall, and her granddaughters Ronnie and Hope.

The full trailer for the second series of the music-based sitcom.

Zoe, I Still Love You

Stef has made a love video.

This Song Is About You

Stef bumbs into Zoe and can't accept their relationship is over.

The opening song from the second series of The Midnight Beast.

Behind The Scenes - Series 2, Episode 1

Watch the musical numbers from the opening episode being filmed.