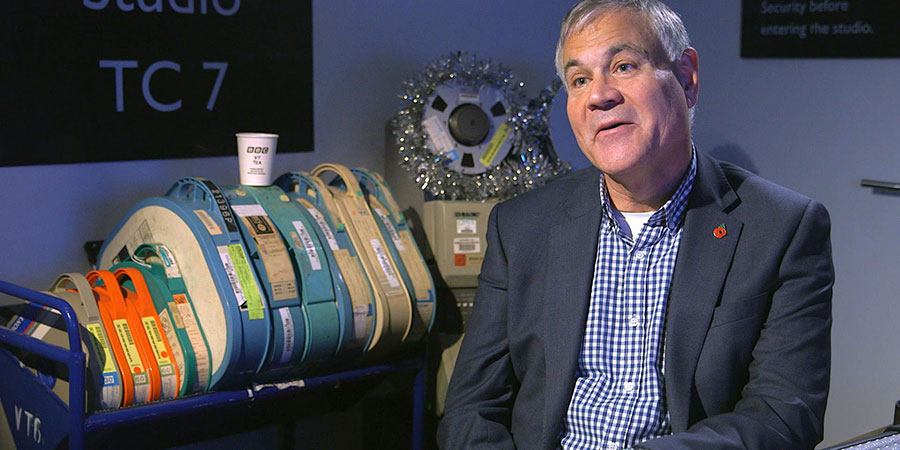 The Secret Story Of The BBC Christmas Tapes

For years, the BBC's production teams would compile video tapes of bloopers, out-takes and curious from the past year's shows, for their own internal enjoyment at Christmas. This is their remarkable story

December 2018 marks the 40th anniversary of the BBC VT Christmas tapes, a series of risque and hilarious bloopers compiled by the BBC's VT department. These festive mash-ups of outtakes, blunders and specially filmed comedy sketches were never meant for public viewing and were shown to staff at Christmas parties. Their story has not been told before - until now! This is the latest documentary from comedian Rhys Thomas, creator of Brian Pern and director of the Emmy Award-winning Freddie Mercury: The Great Pretender.

The Christmas Tapes featured some of the BBC's biggest stars. In those days of formal presentation, viewers were used to watching polished television programmes featuring respected professional broadcasters. It would have been unthinkable in 1978 to transmit footage of these personalities turning the air blue in moments of tension.

The Video Tape department was situated underneath the BBC's famous doughnut courtyard. Editors would cut all the mistakes out of recordings to hone perfect programmes. In 1978 a young VT engineer called Grant Watkins had the idea of saving all the funniest outtakes and cutting them together to amuse fellow staff.

The first Christmas tape is infamous for a saucily re-edited interview with Princess Anne, where she appears to confess to Grandstand host David Coleman that she has experienced sex several times! Editing her answers out of context led to gales of laughter at the Christmas party, but news was leaked to a journalist and the Princess Anne story made the front page of The Sunday People. BBC producer John Lloyd believes that the Princess Anne edit was inspirational on the kind of comic editing later seen in Not The Nine O'Clock News, which began in 1979 and featured footage of politicians and royalty intercut with comedians.

Despite the tabloid headlines, the BBC VT team pushed on with a new tape the following Christmas. It is packed with bloopers from the BBC's best-loved series, but it was clear to everyone who saw the tape that Grant Watkins was spending too much time on his pet project. He was asked to leave the BBC in 1980, and so he passed on the baton of gathering outtakes to his colleague Dave Rixon. It was a role he was to continue for another seventeen years.

The rise of the Christmas Tapes coincided with the boom in domestic video recorders and the Christmas Tapes were soon being pirated. Bill Cotton, the BBC's Managing Director of Television, was forced to ban the tapes in 1983, after his daughter bought one in Shepherds Bush Market.

With the Christmas Tapes outlawed, what would become of the clips that had been gathered during 1983? Step forward Noel Edmonds, host of the Saturday night TV series The Late Late Breakfast Show. He rewarded BBC presenters and actors with Golden Egg Awards in exchange for showing their bloopers to delighted primetime audiences, and in later years the Christmas Tape archive would be mined regularly for Terry Wogan's outtake series Auntie's Bloomers.

The Christmas tapes returned, but by the 1990s, the humour shifted away from subversive sketches and movie spoofs towards a critique of the business strategy of new BBC Director General, John Birt. BBC management were keen to get involved in making the tapes but Rixon feared their subversive edge would be lost. He decided to bow out of producing them for good and the last tape was made in 1998, while the VT department finally shut down in 2013 when BBC Television Centre was sold off and redeveloped.

This programme includes interviews with the original Christmas Tape editors Dave Rixon and Chris Wadsworth, alongside stars who featured in the tapes: Angela Rippon, Bill Oddie, Sarah Greene, Phillip Schofield and Play School presenter Carol Chell, whose bent-over performance as a table dripping with sticky goo won her many admirers in the BBC canteen after it was spliced into the 1979 Christmas Tape. Original master copies of the Christmas Tapes have been sourced to present the archive clips in high quality, with many clips being broadcast uncensored for the first time.