Germaine drags a reluctant Aretha and Yoko to legendary nightclub 'The Dorch' in a final attempt to win Lee's heart.
Preview clip 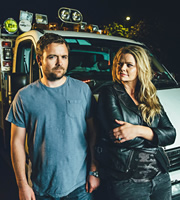 Jubilant at the break up of Cathy and Lee, Germaine drags a reluctant Aretha and Yoko to legendary nightclub 'The Dorch' in a final attempt to win Lee's heart.

Aretha and Yoko are pressed into service as reluctant wingmen and bear the brunt of Germaine's makeover madness. Della goes out with Michael and has an extremely economical but unexpectedly thrilling date.

In the nightclub, Germaine abuses Yoko's trust in an attempt to impress Lee, tearing the fellowship of sister apart and forcing Aretha to defend Yoko.

Whilst Aretha deals with the emotional aftermath of the conflict, Germaine experiences a life-changing revelation that sends her love life in a whole new direction.

As the evening comes to a close, an unexpected arrival at the Garry house stuns the whole family.

Della's on a date with a trucker, in his truck.