When Germaine's vicious 'visible panty line' traumatises the only male Garry child, Della takes the kids into town on an emergency underwear mission. 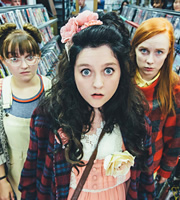 When Germaine's vicious 'visible panty line' traumatises the only male Garry child, seven-year-old Wyatt, Della is forced to take the kids into town, on an emergency underwear mission to get roomier knickers.

Grampy, meanwhile, is tasked with making Wyatt feel good about being male, though his choice of activities are of questionable suitability.

In town frenzy sets in when the kids realise that whilst she appears emotionally self-sufficient, Della requires some urgent care and attention if they are going to avoid her wrath. Broke and running out of time, the kids venture outside the law.