Della and the kids rescue a distraught Grampy in the aftermath of a family bereavement.
Preview clips 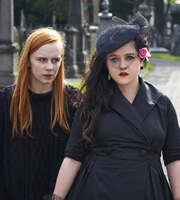 Della and the kids rescue a distraught Grampy in the aftermath of a family bereavement... with little in the way of comfort coming from his wife.

Della decides to take Grampy into the family home. As the funeral nears, Grampy's lack of suitable footwear forces Della to venture into her mother's sinister inner sanctum with Aretha, where they are faced with her highly unusual family memorabilia.

Meanwhile, Germaine tries out various ways to deal with her grief, eventually hitting upon an effective but characteristically inappropriate one, involving a highly respected broadcaster.

Grampy's grief takes him to the edge of reason and in the aftermath of the funeral Garry's discover that Shit Nan has counter-attacked.

Germaine discovers she likes the sound of a particular highly respected broadcaster.

Germaine has some massive news.