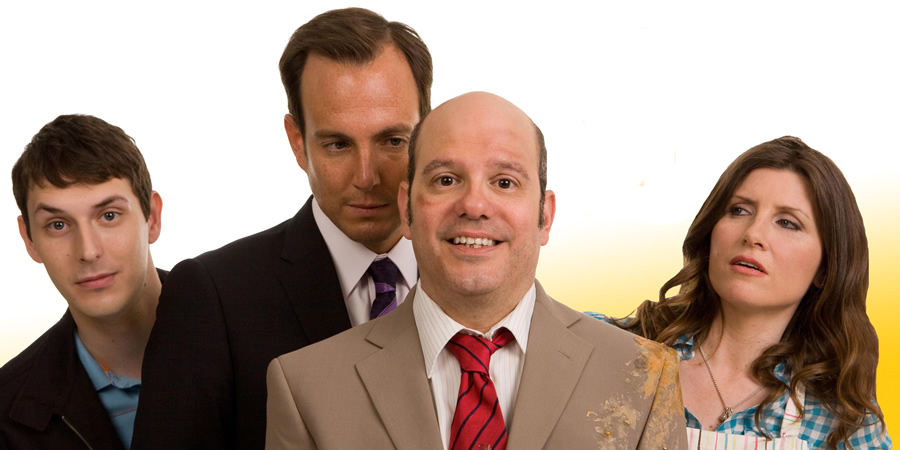 American Todd Margaret bluffs his way into an apparently great job opportunity, heading up the sales team in his employer's newly established London office. All he has to do is sell a dozen container loads of dodgy Korean energy drink before his psychotic boss visits him in a week. Simple. Apart from the fact that he knows nothing about British culture and nothing about sales. He also only has one employee to assist him, Dave, who is perhaps the most wilfully unhelpful employee ever.

Series 2 was screened in America in January 2012, but it wasn't shown in the UK until March 2013 (when FOX acquired the rights). Picking up directly where we left off in Season 1, Todd's got a lot of explaining to do: what was he doing in the Houses of Parliament? Why is there a blood-stained cardboard box on his floor that says ALICE RAPE KIT? And what is his father doing outside the door if he supposedly died in a skydiving accident?

Trying to talk his way out of trouble, Todd, naturally, only makes matters worse. Tired of his lying, Alice storms out vowing to have nothing more to do with him. His foul-mouthed boss, Brent Wilts, actually believes the man behind the door is a ghost and promptly barricades himself in the apartment. And Todd's dad? He's across the hall in Pam's apartment, looking after her very grateful kids.

It's becoming increasingly apparent that Todd's assistant Dave is not all that he seems. Is he really rich and powerful? And why is he so eager for Todd to go to Leeds? However, Todd's got no time to visit his 'hometown', he has to sell $470,000 worth of Thunder Muscle otherwise the mysterious but darkly powerful Mountford will inflict an eternity of pain on him and Brent.

As if things weren't bad enough already, giant supermarket chain Sainsbury's want to sue Todd for ten million pounds and the police want to question a man fitting Todd's description in connection with the sudden death of an MP. Going to Leeds no longer sounds like such a bad idea. But how to get there?

Series 3, shown in the UK in 2016, focuses on a different version of Todd (he has a beard for starters). It sees Todd being sent to London to launch another new energy drink: Lightning Strike. In a case of déjà vu, he soon meets chef Alice Bell at his hotel.