Archie and Bronwen's relationship is put to the test when he's hospitalised following a road accident. Whilst laid up in bed, he gets to know Herschel, and the two are soon in a gambling war. Which side will come out victorious, and could this be another big blow to Allied relations? 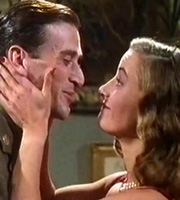 Archie finally entices the WAAF Bronwen into his bed, only to have to escape from her irate father the following morning. Whilst riding back to base on his motorbike he is involved in a head-on crash with Herschel, who has borrowed a jeep and is driving off for the day - on the wrong side of the road. They end up next to each other in hospital and share cognac and tinned peaches.

Hewitt is persuaded by Barker to go along with the view that Archie saved the incoming American plane from a Luftwaffe attack, however, this version of events comes to the attention of an American PR officer. He considers it a great PR opportunity and morale booster, and he and various American reporters turn up at Archie's bedside to present him with the Silver Star medal from the US President, much to Archie's embarrassment.

Archie discovers from Herschel that he had a date with Bronwen on the day they crashed. Whilst in hospital the two play cards, with Archie winning. Later Herschel discovers that Archie cheated with the use of a luckily positioned mirror, and determined on revenge they play a subsequent game in a pub with Herschel's deck of marked cards. Herschel wins but Archie tricks him into returning his money and more by pretending to have had his leg amputated after the crash.

Much to Lady Billingham's horror, her son Charlie organises an Independence Day party, inviting the Americans and his squadron. His voluptuous cousin Rosemary attends the function - and with Archie having been warned off by Barker from getting entangled with Rosemary again after a previous party, she latches onto Herschel. He goes to her bedroom for a passionate encounter, but an unfortunate accident with the shutters makes this impossible.

The American Captain Murphy discovers that Butler is the brother of Violet, the girl with whom he had a relationship in the First World War, and also that he fathered twins.

Herschel finally gets one over on Archie by introducing him to Murphy, warning him about his wooden arm. Archie thinks Herschel is trying to con him and so shakes Murphy's artificial hand which comes off, much to everyone's consternation.

In the present day, an ageing Archie and Bronwen - now married - return to the village near the old air base and lay wreaths at the war memorial. Unbeknownst to them, they are surrounded by many of their fallen comrades, from both sides of the Atlantic.