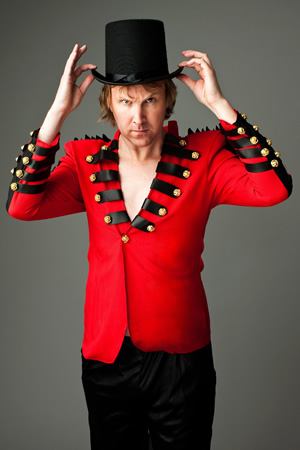 Irish stand-up comic Jason Byrne (pictured) is to be one of the team captains on a new panel show pilot in which guests share photos from their lives.

Photoshop will feature two teams, each comprising of celebrity guest and comedian team captain. The premise of the show sees celebrity guests revealing embarrassing photos with rounds loosely based on the timeline of their lives.

The producers of the show say: "We'll get a unique insight into famous folks' upbringings and candid moments of their lives... and we get to laugh at them sporting ghastly 80s sweaters and car crash haircuts.

"The winning team get to recreate an audience member's classic photograph. The celebrity from the losing team has their most embarrassing photograph shown in a very public place... Wembley, Times Square, a fleet of 24 London Buses, a hoarding outside their teenager's school... who knows?"

At the moment the show is in the early stages of development, and a host has not yet been announced. An early run-through is being filmed during the afternoon of Wednesday 21st November 2012 at The London Studios, which will then be used to pitch the format to ITV. To apply to be in the audience visit our free tickets page

Photoshop is being developed by Channel X, the Manchester based production company that is also behind current BBC Two sitcom Hebburn, and the forthcoming Sky1 series John Bishop's Only Joking. Iain Coyle, who has previously worked on shows including Big Brother's Bit On The Side and Shooting Stars, is overseeing the trial for the production company.

If ITV Entertainment bosses take to the format, a full pilot is likely to be produced early in 2013.

Jason Byrne is perhaps still best known for his stand-up comedy appearances, having appeared on shows including Edinburgh Comedy Fest Live and Dave's One Night Stand, and hosting multiple series of his Radio 2 stand-up show, The Jason Byrne Show. However, as reported in August, he is also currently working on a pilot for a BBC One version of Father Figure, his radio sitcom in which he plays a married man with two sons.

Below is a clip of Byrne appearing on the one-off stand-up show Chris Moyles' Comedy Empire earlier this year:

This story was edited on Monday 5th November to indicate that Jason Byrne is a team captain rather than the host of the show.