Katherine Ryan is to become a regular fixture on 8 Out Of 10 Cats.

She will act as a team captain opposite Rob Beckett in Series 22 of the show, which starts this Tuesday.

E4 confirms: "A regular face on the hit comedy entertainment show, Katherine will go head-to-head with Rob Beckett in the usual playful chat as panellists chew over the country's most talked about topics and guess the results of a wide range of surveys and opinion polls.

"Joining the team captains each week will be a range of well-known celebrity faces, as well as fresh, up and coming comic talent."

Ryan replaces the previous regular captain, Aisling Bea, who appeared in Series 19 and 20, and as one of a series of guest captains in Series 21.

8 Out Of 10 Cats, which launched in 2005, is still hosted by Jimmy Carr. This becomes the latest format he and Ryan now work together on, after Roast Battle, Your Face Or Mine, and Netflix's The Fix.

Spin-off 8 Out Of 10 Cats Does Countdown continues on Channel 4. Ryan hosted an all-women special of the format in 2018, and stood in as guest team captain in three episodes of Series 21 of 8 Out Of 10 Cats.

Katherine Ryan says: "By now, everyone knows that I have information on Jimmy and I'm not afraid to use it. There have been many baby steps, but appearing on Cats in 2012 was without a doubt my biggest break. Describing a new The Voice style format called The Arse; a search for Britain's greatest bum on the show was a life changing moment and I cannot wait to return to Cats as team captain alongside my good friend, Rob Beckett."

Tamsin Dodgson from Channel 4 says: "Over the past few years, Katherine Ryan has become a staple of fresh comedy on Channel 4. Her appearances as a panellist on Cats have been unforgettable, but we are now beyond thrilled that Katherine will be bringing her razor-sharp wit and savage comedic style to the show full time. Katherine's addition alongside Jimmy and Rob promises a hilarious and exciting series."

Ruth Phillips from production company Zeppotron says: "We're chuffed to bits that the brilliant Katherine Ryan is joining us as a new team captain on the show - she's such a great comedian and in her, Rob and Jimmy we have a cast of three of the quickest, funniest wits out there, all at the top of their game and all of whom will be getting a lot of laughs at each other's expense."

8 Out Of 10 Cats Does Countdown returns on Thursday, on Channel 4 at 9pm. 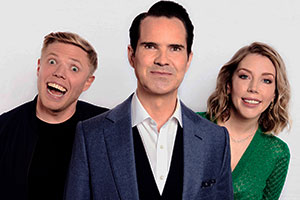