The light-hearted history book 52 Times Britain Was A Bellend looks set to be turned into a TV series, having been optioned by a TV production company.

Written by comedy writer and regular Twitter user James Felton, it was published last month. The book marketed as: "The painfully funny history of Britain you were never taught at school, chronicling some of the ludicrous things the British have done to the world since time immemorial - and then conveniently forgetting we've done them, of course."

Now Open Mike Productions, the TV production company behind shows including Live At The Apollo, The Last Leg and Lead Balloon, have bought the TV rights.

The Bookseller reports that they plan to develop a TV comedy series format based around the book's content.

Andy Thistlewood, who is head of development for Open Mike, says: "James Felton's book is laugh-out-loud funny, so naturally we wanted to exploit his genius! James expertly weaves fascinating historical nuggets of Britain's bellendery with some obscenely funny jokes, so we're confident that his book will transfer perfectly to TV. Just when we thought we couldn't be more concerned about Britain's global reputation, James comes along to show us that we need not worry - Britain has always been a bit of a bellend."

Emily Barrett from publishers Sphere says: "James' book is that wonderful combination of hilarious and informative (with a pinch of self-loathing that we Brits are either excellent at or need to become so as a matter of urgency). I have no doubt it will make perfect comedy television at a time when Britain's global reputation is under the microscope, and I hope it introduces more people to James' brilliant book, which we are very proud to publish on the Sphere list."

52 Times Britain Was A Bellend is currently at the development phase, and should it be commissioned, more details will be announced. 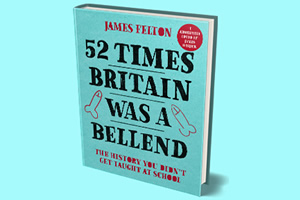 52 Times Britain Was A Bellend