Paul O'Grady is to pilot a new comedy entertainment show.

The producers explain: "Paul O'Grady's Saturday Night Line-Up is a pilot for a brand new comedy entertainment show in which Paul's fantastic line-up of celebrity guests are presented with a number of intriguing questions, scenarios and dilemmas."

The pilot will be filmed in front of an audience. Advertising free tickets to the recording at BBC Elstree Studios on 30th October, the producers say: "If you're lucky enough to be in the audience for this show, you may have the opportunity to pose a question to the guests!"

It is not currently known which broadcaster the pilot is being made for. Further details are expected to be revealed at a later date.

It will be the first time the comedian has fronted a comedy show in a number of years. In recent years he has presented documentary series For The Love Of Dogs, and the new incarnation of Blind Date, for Channel 5. 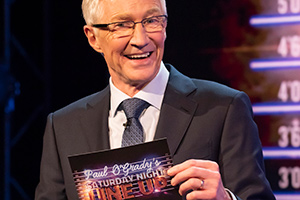