Sky 1 has ordered Carters Get Rich, a new six-part sitcom series about a child who develops and sells a phone app for millions of pounds.

Carters Get Rich is described a show about "a normal family holding onto their rags in the face of corrupting riches".

The series follows 11 year-old Harry Carter (played by Rio Chambers) who creates Honc, an app for geeky kids like him who don't know how to talk to girls. Honc becomes the next big social networking app and it is bought for £10 million by US billionaire, Trent Zebrisky (Van Der Beek), who installs a family advisor in the shape of posh Etonian Oliver (John Finnemore).

Rhashan Stone will play Tony Carter, Harry's father and head of the family. Tony is an ordinary working class dad who drives a 'Bell A Bus' for OAPs. He's proud of his life and his family's simple happy existence. So when his son becomes a multi millionaire, Tony's a little threatened by it. His impulsive wife Liz (Kerry Godliman) and impressionable daughter Ellie (Rhianna Merralls) just want to have a ball, but Tony fears the worst and doesn't want to "raise a messed-up little Justin Bieber-type". It becomes a constant battle for Tony to stop his family from going off the rails.

Carters Get Rich has been created by Claire Downes, Stuart Lane and Ian Jarvis - the writing team behind ITV2 sitcom The Job Lot. The series is being directed by Chris Cottam, whose previous shows include Sunny D.

Adam MacDonald from Sky says: "I can't wait to share this thoroughly modern sitcom on Sky 1. Funny and fresh, the unstoppable Carter family put the 'social' in 'social media' & the 'O.L' in 'L.O.L'. It's a Honc-ing good show with a Honc-ing good cast!"

Ash Atalla from production company Roughcut TV adds: "We're very proud of this new series for Sky 1 and it's a fantastic example of Roughcut TV's ability to create a range of modern and mainstream sitcoms with international appeal. The team is thrilled to further build on our long-standing relationship with Sky and deliver another exciting new show for the broadcaster."

Producer Alex Smith comments: "Carters Get Rich features one of those families we all know as they go through an extraordinary life changing experience. The show offers a interesting portrayal of how we might all go a bit bonkers if your eleven year old is given millions of pounds."

Carters Get Rich will be shown on Sky 1 this autumn. 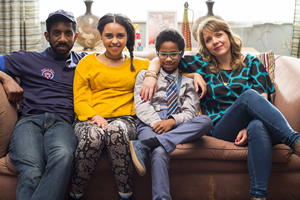