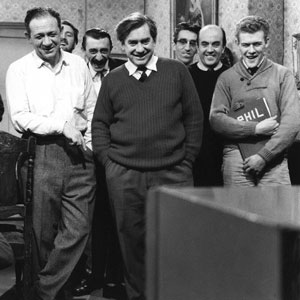 BBC One is to celebrate British sitcoms with a dedicated season next summer.

Marking 60 years since Hancock's Half Hour transferred from radio to television - on Friday 6th July 1956 - the season of programming promises to "revisit loved classics alongside launching new shows".

Expected to coincide with the inaugural broadcast of Hancock's Half Hour, the season will be launched with a special new episode of current smash-hit comedy Mrs Brown's Boys - broadcast completely live.

The BBC explain: "BBC One will mark our enduring affection for all the great comedy characters we have met over the 60 years by enlisting the biggest names in British comedy writing and performing to revisit loved classics alongside launching new shows in a landmark comedy season."

The season is expected to mix Comedy Connections-like documentaries with new formats, and celebrities advocating their own favourite shows in a similar fashion to the 2004 Britain's Best Sitcom poll.

BBC television's first ever sitcom was Pinwright's Progress, which was first broadcast on Friday 29th November 1946, and will celebrate its 70th anniversary next year.

Further details of the season will be revealed closer to broadcast.