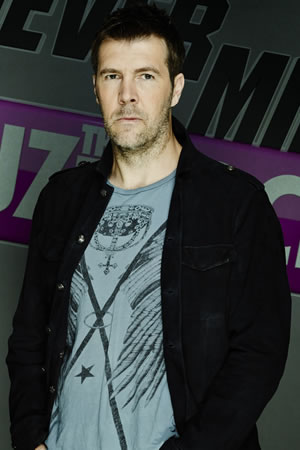 Rhod Gilbert is about to introduce himself to viewers as the new permanent host of Never Mind The Buzzcocks. Ahead of the first recording, BCG gave him a call to find out more about how he was preparing. Rhod was in the middle of Wales - no phone, no internet - so we ended up calling him on a payphone.

Hi Rhod. Taking over Buzzcocks is quite a big deal. How long did you to think about the offer before saying 'yes'?

I think it was instant really. It's one of those things where you go 'yes' straight away, then you think about it.

I've never said this publicly before, but five years ago, in 2009, when I first guest hosted Buzzcocks, they were at that point talking about having one year of guest hosts, with a view to looking for someone to take over. I had a good one then, I enjoyed it. I think they were happy with it. They said to me then "we're looking for a host, you're in with a shout"... five years later I get a phone call saying "remember hosting Buzzcocks...?"

I have to say, I had probably given up any hopes. I thought the prospect was really exciting, and then it never happened. It went off the radar, so when they came back with it, I think was pretty much an instant 'yes'.

Previous hosts Mark Lamarr and Simon Amstell shaped the show with their strong personalities. Have you thought about adopting a particular style yourself?

I have been thinking about it. I've just finished doing the fifth series of Work Experience [Rhod's BBC Wales show in which he tries out different jobs] so I'm having a little break in the Breacon Beacons right now.

I think I've spent too long thinking about it. Once you get in there any thoughts of how you're going to do it go out the window anyway. I will just end up being myself.

In stand-up I may have a bit of a persona, but the only time you can really employ a persona is where you only have to deliver a line or two. Like 8 Out Of 10 Cats Does Countdown, they'll come to you and say "what have you got for the letters?", and you need a bit of a persona perhaps to say one funny line... but when you're in a conversation or a spontaneous comedy situation you can only be yourself, there's nothing else you can do.

There are 12 episodes in the first series and, if it goes well and there's another series... there's no way you can hold a persona for that long, I don't think.

But it doesn't matter how much I think about it, because when we start I'll forget all that and be myself. This thinking - rolling it over in my head, spending five hours thinking how I'm going to be whilst walking in the Breacon Beacons - it's all wasted time... I'm going to be me! I look back at everything I've ever done - every radio show, every TV show - it's just me in that situation responding to people around me and the audience.

But it's good I'm thinking about it I suppose. I'm not going to be complacent. It's big shoes to fill - there's no question that those two have left an indelible mark on the programme. 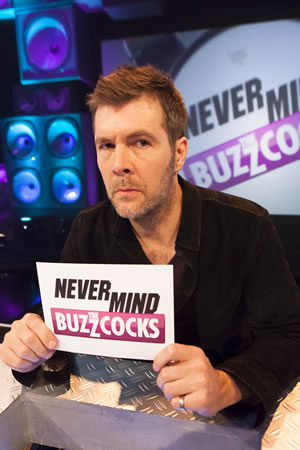 You were thinking about writing a TV sitcom based on your Radio 2 pilot, Rhod Gilbert's Leaving Llanbobl - is that still a plan?

That's what I was supposed to be doing now. As soon as this Work Experience finished, "back to my sitcom", I said! I was supposed to lock myself away to write these scripts. My new plan is that the first six months of next year I'll write this sitcom and get it done. I've got a huge amount of material but it's currently all over the shop - the characters aren't defined properly yet, and the plots are all over the place - but I've got sort of six episodes on the go. I've got hundreds and hundreds of pages of sitcom.

It's the same characters as the Radio 2 pilot: my brother, which I'm writing for Lloyd Langford, and Greg Davies will hopefully be in it. I'm excited about it... I can't wait to get back to it, the only question is where it sits.

Firstly, I'm writing the whole thing before it gets commissioned, which is a gamble. I'm really happy with it though, unless I've got it totally wrong! I'm not doing it the way of getting a commission for a pilot, and having some money and going away and having the deadline... I just want to do it myself at my own pace.

I'm enjoying the process so much. It's such a jigsaw puzzle though - little things that happen, you move one thing and think "oh that's great" and then you go "oh that has repercussions about everything else", all the way back through the last five episodes. It's awful, but enjoyable.

Will you appear in it?

At the moment the main character is me. I'm sort of terrified and excited by it in equal measure. But I haven't really thought that far ahead. The question is whether I go to the audition, ha ha.

Work Experience is enduringly popular. As you mentioned a moment ago, you've just finished the fifth series...

I did one with the RAF; one as a vet; one as a fisherman, a trawlerman - just for a day; and one in a hotel. It's gone alright I think. I've been working on it for months: editing, seven days a week for the last few months, I think we're fairly happy with it. Usually we've got three we're really happy with and one we're not so happy with... I won't tell you which one that is this time.

It's such a hard job to do because the budget is small and we've got three or four days to film - we've got a camera guy, a sound guy and me and we're the only ones on set. I did a very short thing for Channel 4's charity fundraiser the other day. It was only a 9 minute package but we had a director, an assistant director, two cameramen, two sound men and about four runners... on Work Experience, for the whole five series, we've had a cameraman, soundman and me. And we edit it as well! I really enjoy it but it's very intense. The two guys I work with work incredibly hard. 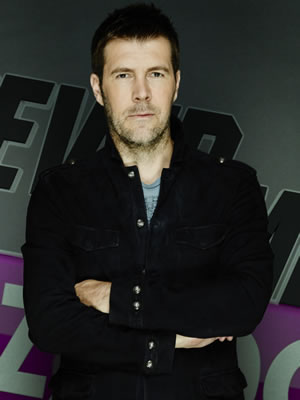 Earlier in the year, you recorded a new comedy chat show pilot, Delete Delete Delete, based around peoples' internet history. Any news on if that'll become a series?

I've not heard any news about that. Nothing! This is the thing with TV. You do gigs in Afghanistan [for the military] and they've got this great phrase "hurry up and wait". They'll say "Quick, everybody over there" and you all rush over to an aircraft hangar or whatever it is, and then you sit there for seven hours. TV is a bit like that.

We did two pilots for it and I think there's something in it. As a chat show vehicle it sounds like the worst format - when I did the first pilot a tweet was put out "Rhod Gilbert looks through someone's internet history" or something like that and replies came back like "TV is dead". And you know what, when you put it like that...! But we all live our lives online and it's genuinely interesting.

As you've spoken about in the past, all this TV work means you're not performing live any more. Do you think you'll return to the stage sometime?

When you're in a fast moving river, you're in that... and then you get out, and are on the bank and you're looking at the river - it's a very intimidating thing to jump back into that fast moving thing you were in.

But to have the idea that I'd never do it again...! I don't feel like I've said goodbye to it in a way. So I think probably what is happening is I'm doing other things for a while and I will probably go back and do some more stand-up. The pattern I'm following, there's probably a lot of precedents of people doing this... But ultimately, the control of live stuff - and I am a control freak - can't be beaten. Saying what you want, producing, script editing etc - it's great. I'm sure I'll be back.

Never Mind The Buzzcocks is on BBC Two on Mondays at 10pm.