Christine is determined to stop drinking and manages to get herself on a clinical trial for a new drug supposed to suppress the desire to drink. 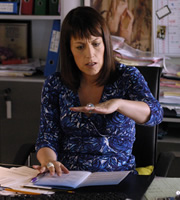 Roger is excited that his wife Clara is finally coming up to Leeds to spend some time with him. But his tour of the office with her is interrupted by an unwelcome visitor - a woman called Margaret Fox, who is as Jenny says, 'Uxbridge Holdings'.

Clara initially thinks Roger's having an affair until he's forced to confess all: he's been paying Margaret for years to cover up for the fact that he hit her in his car when he was drunk-driving. Clara tells him he has to stop it and come clean - and retire. He's about to do so when Jenny tells him she's managed to get rid of Margaret. Clara's so worried about Roger and the stress his job is causing that she tells Alyson the whole story - and Roger is forced to resign by the board.

Christine is determined to stop drinking and manages to get herself on a clinical trial for a new drug supposed to suppress the desire to drink. It's all going really well until she sees Margaret Fox, panics, overdoses on her medicine and is rushed to hospital.

Sally is trying to avoid Steven since he and Alyson went public but Natasha's brilliant plan of getting a load of good looking colleagues on the same first aid course goes wrong when she forgets to cancel people - and Sally finds herself on the course with Steven. Things get too much between them and Sally loses her temper with him. But he tells her that he wishes things were different. They're about to kiss when they're interrupted by Max who's found Christine collapsed on her floor.

At the hospital, Christine tells Sally that she knows now that she really has to make a big change in her life. These words get through to Sally and after she's dropped Christine off at a rehab clinic, she rushes back to work and goes straight to Steven. Finally, they kiss.