Max is finally made official acting head of marketing and reminds Vince and Natasha that the promotion to marketing assistant is still on the table. 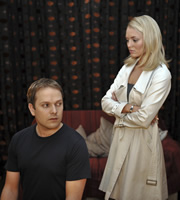 Natasha is appalled when the first big marketing idea is to bring in a former Wimbledon doubles finalist, Nathan Wright, to promote a new healthy food range. The office later realises why she's appalled when they learn Nathan is Natasha's brother - and there's a lot of old bad blood between them.

Max is also in trouble as he's boasted of his own tennis prowess and Vince hits on the idea to hold a match between him and Nathan. Max and Natasha both have reasons to get rid of Nathan and after persuading Alyson that he's the wrong man for the campaign, go out to celebrate and get drunk - and to Natasha's horror, they end up at Max's flat. But as she confesses to Sally later, nothing happened, other than they 'shared' - which for Natasha is worse than having sex with Max. Natasha confesses why she resents Nathan so much, and Max admits that he's lied about his past - he never won any sporting trophies and in fact had a miserable time at school.

When Sally tells Natasha that she's overheard Nathan in a terrible state about the way his life's turned out she feels guilty and gets Max to reverse the decision to drop Nathan from the campaign - which means that he still needs to get out of the tennis match. Max flips a coin and makes Natasha the marketing assistant.

The staff are appalled that new identity cards will stop them sneaking in and out of work and come up with a plan for a fake worker whose card they can use to come and go. Meanwhile, Roger is horrified that a blog has appeared in his name spreading rumours about various things including the fact that Alyson has a toyboy. The Karens are presumed to be guilty of this and are punished, but in fact, unbeknownst to anyone else, Jenny is responsible.