Holly Willoughby talks about her latest children's book, Dynamo brings some magic to the studio and Ray Winstone talks about his role in Noah.
Preview clip 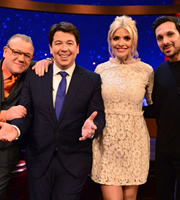 In the fifth episode, TV presenter Holly Willoughby will be joining Michael to talk about her latest children's book, as well as all things This Morning.

Also on this show is the UK's top magician, Dynamo, who will be bringing some magic to the studio as well as chatting to Michael.

Michael shows off his magic skills by performing his own unique card trick to Dynamo.