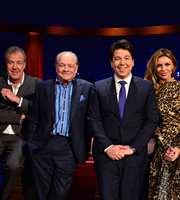 Sir David will be chatting about the return of Only Fools And Horses, which will be back on screens after a 10-year absence, with an eagerly awaited sketch for BBC's Sport Relief that will see David Beckham join Del Boy and Rodney in Peckham.

Below is some transcripts from the interview:

It's been 12 years since you last did Only Fools and Horses... had you intended to ever do it again? Had you pretty much said goodbye to that?

No we never did. As you know, unfortunately, bless him, John Sullivan, the creator of it all, very unfortunately died. And as Nick Lyndhurst used to say, Sullivan made the ammunition and we just fired it. So he was the brains behind the whole thing. So when dear John died we thought that was the end of it.

So who wrote this sketch?

Well apparently it was part of some notes that John had left and it was re-put together by his two sons Jim and Dan. What had happened was that they wanted to do something for this Sport Relief and they got hold of David Beckham and asked would he do something and he of course said yes. And during the course of the conservation he said he had always loved Only Fools And Horses and that it would be great to do something with me and Nick. So then the grapevine started to work as these things do...

So it came from Beckham?

Apparently yes. So then what happened was that they got in touch with Dan and Jim Sullivan who then said yes I think they have something that might work and so it snow balled. They then approached me and I said well if the script is good and Nick Lyndhurst would do it then yeah we would have a go as it's such a good charity.

It's generated such excitement. So how does it feel for you then reviving Del Boy?

Once I read the script that they intended to do, and I said yes I would do it, it was so much of Sullivan and so much of Fools And Horses the original that I said yes let's do it. When I got together with Nick for the first run through it came back like that (clicks fingers). I didn't even have to think about it.

Its like anything, its like falling off a log. As soon as I put on the gear and started to look at the script, back it came.

Looking back at everything you've done through acting, is this your favourite time? What time do you look most fondly back to?

Well I think probably Fools And Horses reached most people and gave them so much pleasure because of the amount of mail I got. But nearly everything I've done over the years, including all my stage work, has given me so much pleasure.

David Jason on the creation of Del Boy

Sir David Jason talks about the creation of Del Boy.