In a flashback to four years ago, Dylan has been seeing Bethany for several months, but when she invites her protective big brother over to dinner a terrifying thought occurs to him that he has fallen into a serious relationship with her. 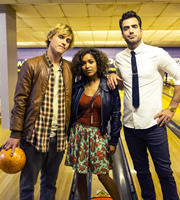 Dylan has been seeing Bethany for several months, but a terrifying thought occurs to him when she invites her protective big brother over to dinner.

Meanwhile, Luke drags Evie away from an important photography assignment to go to his work bowling night, hoping to find out why his new boss Diana has turned all the women in the office against him.

When Evie's camera gets stolen, Dylan is asked to escape from his disastrous dinner in order to bring her spare one.