Enthusiastically encouraged by Luke, Dylan sets about tracking down Phoebe who hasn't returned any of his messages. 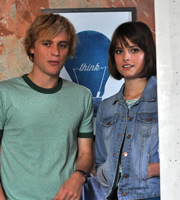 Enthusiastically encouraged by Luke, Dylan sets about tracking down Phoebe who hasn't returned any of his messages. But when the two of them show up at Phoebe's family home, they receive unexpected news.

In a flashback to six years ago the gang are at a pub quiz. Dylan is terrified that his new girlfriend Phoebe is basically the female version of Luke, who struggles to dampen his attraction to Phoebe.

Evie, meanwhile, is preoccupied that she isn't remotely attracted to her boyfriend Angus, but doesn't want to hurt his feelings.

Back in the present, Luke, in a rare reflective mood, pressures Dylan to finally tell Evie that he loves her. But will Dylan bottle it when things seem to be going so well with Abigail?