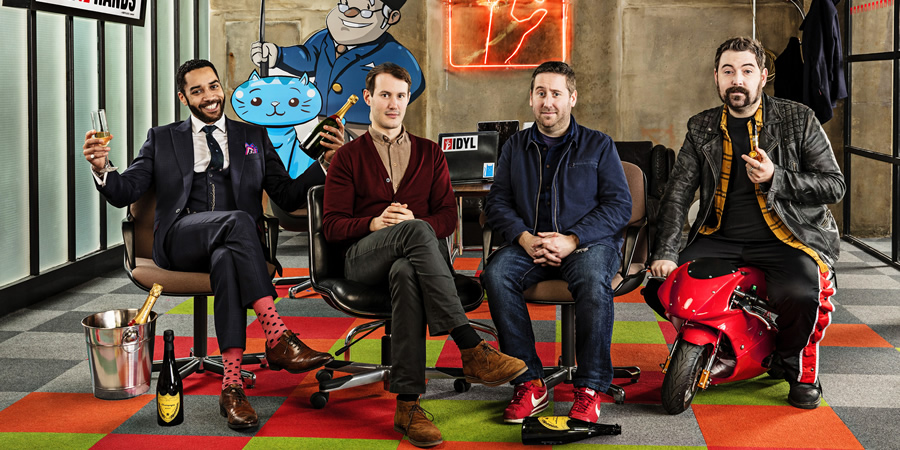 Josh, Vinny, Ewan and Watto have just sold their start-up video game company for a clean £246 million - the culmination of a billion man-hours of blood, sweat, toil, coding, shouting, swearing, fighting, hugging, pitching, grinding, and, occasionally, showering. Overnight, the four friends are transformed from "people who play games" to "serious players in the game..." - or are they?

Almost immediately, the sweet smell of success takes on a bitter, slightly unpleasant tang. Josh, hyper-sensitive and riddled with "millionaire's guilt", finds himself crippled by the burden of his wealth and its "wider socio-economic implications." Vinny lets his most extravagant desires run amok and buys a bespoke golden Viking helmet, but can a Nando's Black Card buy him the one thing he truly desires - respect? Straight-edge ex-junkie Watto finds past mistakes come back to haunt him and threaten not only his own fortune but that of his friends too. While tragic beta-male Ewan is eyeing up spending some of his money on reinventing himself, starting with "an ear-job and nice new pair of chinos."

Loaded is a comedy-drama about friendship, ambition, gluttony, the peculiarly British distaste for other people's success, and what happens when you've got £11.5m in the bank but the cash machine has a £300 daily limit. It's about four friends trying to cling onto the slats of their relationship in the eye of a raging hurricane of money and excess and personal butlers and gold-plated Nordic headwear.