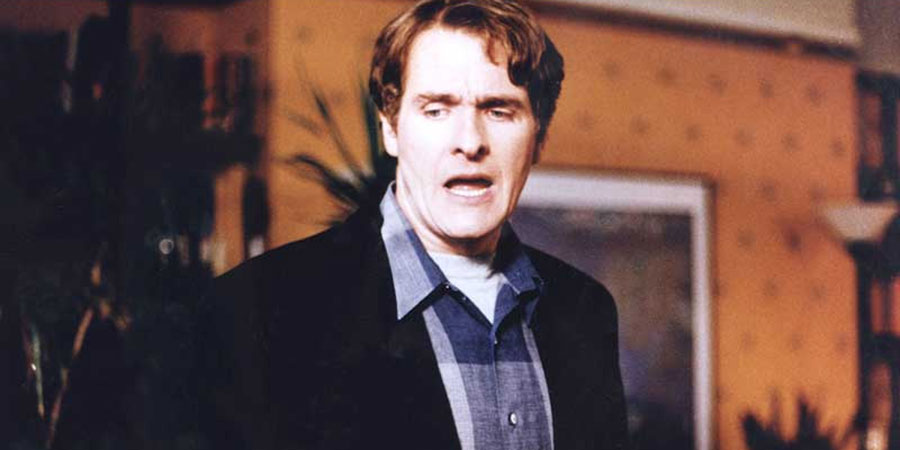 Joking Apart is a refreshingly different and adult comedy, which was ahead of it's time, winning both critical acclaim and a highly-prized award at the Montreux festival. Written by the hugely talented Steven Moffat (Coupling, Press Gang, the revived Doctor Who), Joking Apart was a riotous modern farce that was decidedly dark in places.

The BBC trailed Joking Apart as a 'bittersweet comedy'. The writer himself described it as a romantic comedy, but a romantic comedy backwards, where the couple start off happy and end up unhappy - a novel take on a familiar theme. Much of the humour is mined from acutely embarrassing set-ups that have become something of a Moffat trade-mark, yet the series still provides for some truly moving moments between the laughs by virtue of clever scripts.

The plot centres on the break-up of the marriage of quick-witted comedy writer, Mark Taylor, and his equally sharp wife, Becky. He is a master of the one-liner, a quality that initially draws the couple together during a whirlwind romance, but as time goes by, becomes an increasing source of irritation. Astonishingly, this is the reality behind the real-life divorce that Moffat was himself going through at the time. When, towards the end of the first episode, Becky announces she is leaving and moving in with her lover, it's played out against the most embarrassing backdrop imaginable, thus setting the tone for the rest of the series. The set-up is imagined but some of the lines were supposedly very close to home.

Throughout the series, Mark remains obsessed with winning back his wife, especially as her lover is, God forbid, an estate agent! Caught in the crossfire are their mutual, but none-too-bright friends, Robert and Tracy, whose own marriage suffers as a direct result of the continuing fallout.

In the first series in particular, the action typically takes place in dual time frames. Contrasting the happier times of the past to the pain of the present, Mark's sorrow seems all the more poignant. This inevitably draws us into the relationship and we find ourselves hoping that this seemingly well-suited couple will one day patch things up and get back together.

Punctuating the unfolding plot, are sequences of Mark performing stand-up in a seedy club. As these fantasy sequences represent the comedian in Mark's head, it's no surprise that the split dominates his routines. The line My wife left me is used almost as a catchphrase.

Inspired writing was complemented by a perfect and enthusiastic cast. In the demanding role of the hugely likeable, but severely flawed, Mark, was Robert Bathurst, who subsequently found fame with Cold Feet and is familiar to younger comedy fans via My Dad's the Prime Minister. Fiona Gillies played the feisty adulteress, Becky, bringing enough warmth and sheer downright sexiness to the character to make Mark's devastation completely understandable. Throwing themselves, with commendable gusto, into the supporting roles of the dim but always-entertaining Robert and Tracy, were Paul Raffield and Tracie Bennett; while Mark's non-entity of a love-rival, Trevor, was excellently portrayed by Paul-Mark Elliott.

With its universal appeal, the series would now probably be regarded as an all-time classic, but for some truly bizarre scheduling which saw the show consistently tucked away on BBC2 at the same as ITV was screening established ratings-winners such as Minder and Peak Practice.

Thankfully the show is now getting a new lease of life thanks to a most remarkable of DVD releases. Frustrated by the BBC's apparent lack of interest, one dedicated fan decided to have a go and try and buy the rights to release the DVD himself. Against the odds, he succeeded and launched his own DVD label on the back of it. If the BBC has any vision at all, it should take note and realise that it could do worse than repeat this comedy on TV!