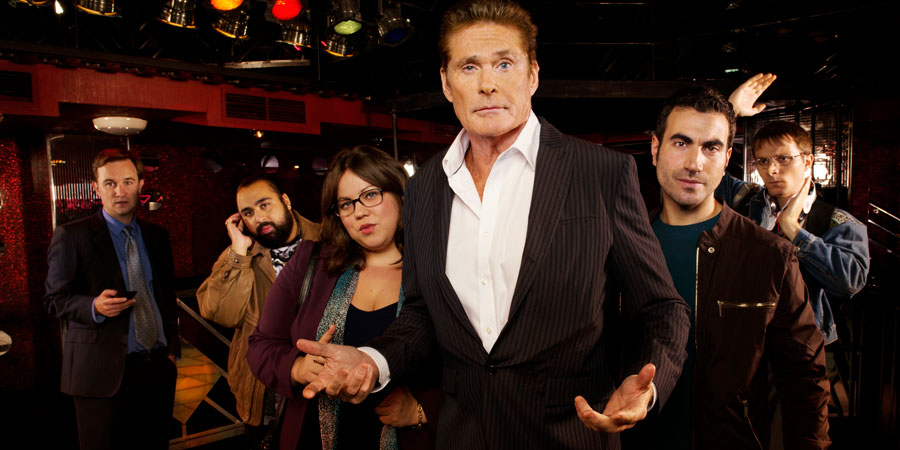 Shot in the style of a documentary, Hoff The Record is about the life of The Hoff, a fictionalised version of David Hasselhoff, 30 years after rising to fame with the global hits Knight Rider and Baywatch.

Series 1: After five divorces and some misguided professional decisions, The Hoff is in the UK ready to star in a new independent film that could reboot his career. But alarm bells start to ring when he gets the low budget treatment on arrival from the US.

After a series of on-set clashes, it's soon clear that the director has a very different vision for the project and The Hoff tasks his UK manager to find something more worthy of his talents.

As his attempts at everything from fronting a charity to becoming a global peacemaker fall into disarray, can The Hoff get his career back on track and make sense of his increasingly surreal life?

Series 2: The series opens with a botched attempt at raising Hoff's profile by faking his death. When the plan backfires, his manager Max's solution is to rehabilitate Hoff's image by putting him into rehab while making some money on the side selling confessional videos. But Hoff soon falls under the spell of a patient who recruits him in a suicide pact and needs to be rescued.

With Max and Hoff's relationship at a low point they go their separate ways. Max struggles to control his new young client's hell raising behaviour, while Hoff gets a big-talking replacement who promises to get him Shakespeare but signs him up to a celebrity cage fighting contest instead.

Can Hoff revive his career?