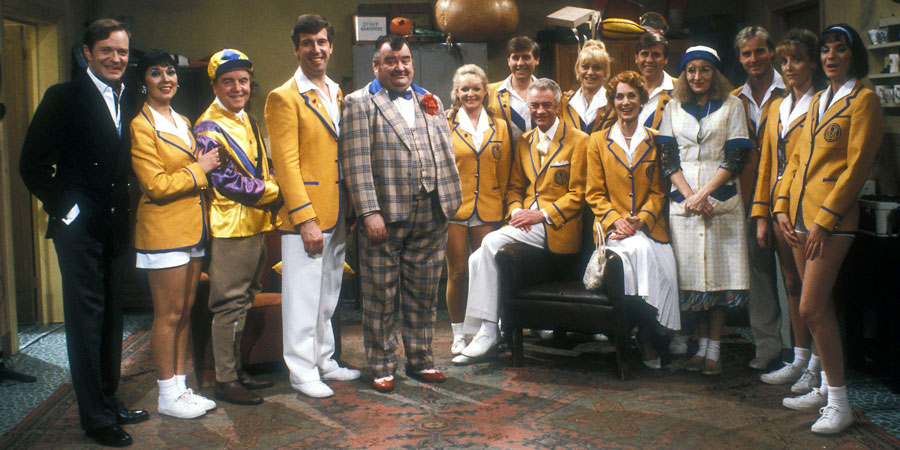 Here we find our heroic Yellowcoats involved in all kinds of jolly japes and comic capers; in the chalets, in the Hawaiian Ballroom, and all around the Olympic-sized swimming pool. So roll up your trousers and get those knobbly knees out, it's time for a holiday season of fun and frolics - come on campers, Hi-De-Hi!

As the 1959 holiday season opens, company boss Joe Maplin has appointed a new Entertainments Manager to one camp: former Cambridge archaeology professor Jeffrey Fairbrother. His wife having left him and accused him of being deathly boring, he's determined to prove to everyone - not least himself - that he isn't.

Jeffrey quickly attracts the amorous attentions of Valleys-girl Gladys Pugh, the camp's sports organiser and voice of Radio Maplin's. Meanwhile, Camp Host Ted Bovis is really running the show, often with an eye to making a quick buck for himself, much to the chagrin of new Camp Comic Spike, who does not feel at all comfortable with Ted's dishonesty.

Meanwhile, the camp's entertainment team - the Yellowcoats - are none too keen to allow aspiring performer and Chalet Maid Peggy join their ranks; ballroom dancers Yvonne and Barry Stuart-Hargreaves are often at each others' throats; and former professional jockey Fred Quilley attempts to keep equine activities under hand.

Come the 1960 season, and there's a big change: Gladys is heartbroken by Jeffrey's departure, but is eventually won round by his smooth-talking replacement, the Honourable Clive Dempster, DFC.