Pauline is struggling to support the family on her own following Joe's stroke, whilst Sarah is growing ever more exasperated and desperate to move out. But first, there's a funeral.
Preview clips 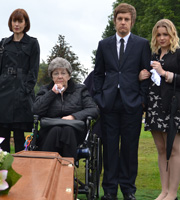 With a baby on the way, Jack and Sarah are desperate to move out of the family home. Joe's recovering from his stroke so Pauline goes back to work as an estate agent and is struggling to sell her first property, but a surprise windfall for granny Dot solves all their problems.

Jack's feeling the pressure at work on the paper and at home, but gets a bit of fire in his belly... and elsewhere.

Pauline narrates the trailer for the series two of Hebburn.

Joe convinces Pauline to give him a sneaky bit of cake.

At her friend's wake, Dot complains that things are going missing at the old folks home.