Jack's got a particularly important interview lined up, and Sarah's really starting to feel the stress of being a cramped guest in someone else's house. Vicki's just delighted to be getting her own car.
Preview clips 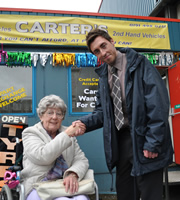 The Geordie answer to Thelma and Louise are on the road; Dot buys Vicki a new car and nearly drives her off a mental cliff.

Sarah attempts to give Jack advice on his interview technique as he tries to find a new job at a newspaper somewhere, anywhere as long as it's not Hebburn, so they can leave the spare room in the family home.

Jack is desperate for them to leave but won't compromise in the job market, especially when he bumps into his old boss from the Hebburn Advertiser.

Joe and Pauline would like a little privacy, but at least Sarah is doing her bit around the house; too much for Vicki and Jack's liking - she's making them look bad.

Jack needs consoling at Swayze's when the interviews don't quite go according to plan, but Sarah doesn't fancy a drink.

Sarah helps Joe and Pauline out with the housework, but gets a bit too much information.

Jack and Sarah are feeling the pressure as he struggles to find work so they can move out.