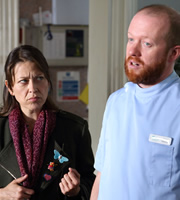 Eve seems keen to take her relationship with Sara further but Sabine's intervention throws a spanner in the works.

Meanwhile, Jamie is having a masculinity crisis and Daniel offers to rectify this with his own unique brand of machismo.

Sabine arrives at Sara's house uninvited. They get into a heated discussion in French.