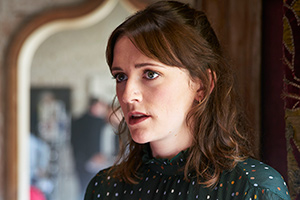 Alison moved in to the house the ghosts live in with her partner Mike. She is the only one who can see the ghosts.

She aims to find a harmonious routine with the ghosts as she juggles their incessant demands with the pressures of married life and stretched finances.

Enthusiastic and impulsive, Alison is as bad an influence on Mike as he is on her - like two Yangs with no Yin. Still, Alison makes the best of what they have, even as the walls literally fall apart around her.

In Series 2, whilst she still harbours big ambitions for the house, her hotel dream is now on indefinite hold, forcing her to embrace more achievable plans in the short term. This has instilled a new hope in both her and Mike, as fresh thinking promises a new revenue stream for the cash-strapped couple. 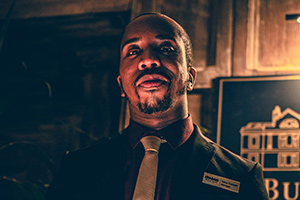 A big-hearted liability, Mike will always work hard to keep his and Alison's dream alive. Too 'big picture' to focus on trivial distractions, but very loveable despite his flaws, he'll always leap in with both feet... and only then check if it was into quicksand.

He still sees the potential the house has to offer them in a variety of ways, convinced that - one day - the crumbling money pit will become the house (and business) of their dreams. He firmly believes you can do anything you put your mind to, despite a lifetime of experience to the contrary. Whilst still trying to get used to Alison talking to mid-air, Mike is slowly getting more comfortable with the presence of the ghosts he can't see... At least, that's what he tells himself when one might well be in the toilet with him. 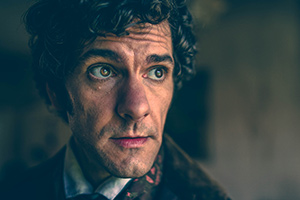 A romantic poet in a Byronian mould. Overly dramatic and linguistically flamboyant, he is very trying company; his tortured melancholy grates upon those from every other era, who simply can't be doing with his nonsense.

He died lovelorn and besotted, so exists in a state of permanent romantic infatuation, which he has transferred wholly onto Alison since her arrival in the house.

Thomas takes every opportunity to belittle her husband Mike, alluding to his shortcomings and character flaws - both real and invented - safe in the knowledge that Mike can neither hear him nor do him any harm. The sort of bravery that you'd expect from a poet. 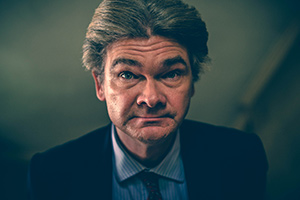 An MP who died in "mysterious circumstances", leaving him (quite literally) with his trousers down for eternity.

Utterly bereft of morals, but, ever the politician, he tries to give the impression that he's the embodiment of diplomacy.

He says one thing, does another, and would sell his own grandmother if it served his agenda.

Julian allies himself with whoever has the advantage that day but has no hesitation in stabbing them all in the back if the need arises. He's perfectly pleasant to talk to but has a fabulous knack of using a lot of words to say nothing at all. Were he not dead, he'd probably be running the country.

The house's one-time owner, who basically thinks of it as still being hers.

Sees herself as the ghosts' moral guardian, despite the utter futility of trying to enforce Edwardian values on such historically disparate housemates. Inhumanly strict and starchy, she is hugely dismissive of modern thinking, fashion, and, by and large, people.

Since admitting to the others that her husband George pushed her out of a window after she caught him "'upon' the groundskeeper... with the butler 'upon' him", Lady Button has been battling the shackles of Edwardian patriarchy that were placed on her in life, whilst learning what it means to be a woman in the 21st century through her descendant, Alison.

Although she can't help but remind Alison about propriety and appearance whenever she can, a gradual softening may lead to a more compassionate existence in the house for Lady Button. Until someone is impertinent to her, obviously. 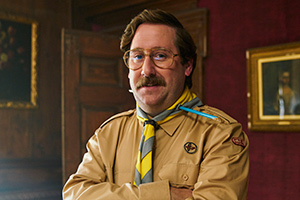 Despite being accidentally shot through the neck with an arrow by a young member of his adventure club, Pat still bristles with the heart and energy of an encouraging team leader. Wholesome, positive and determined to keep up morale, Pat is every bit as inspiring - and annoying - as that sounds.

Seeing the good in every situation, he loves the idea of galvanising the ghosts into a team, but utterly lacks the status ever to achieve this. He's the self-ordained entertainments officer - like the really well-intentioned neighbour who constantly tries to induct you into the local am-dram society. 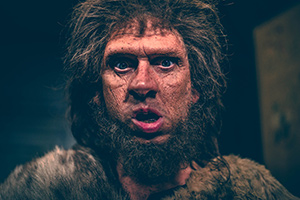 As the house's oldest inhabitant (by quite some margin), he has seen and learnt a great many things... but has forgotten far more than he's remembered. His primitive speech means that even his more lucid thoughts can only be expressed in staccato bursts of adjectives and nouns. Like a badly wired supercomputer than can only communicate through a Speak & Spell.

Full of the wisdom that comes with existing for 10,000 years, Robin is confident in his point of view of the world but is always full of childlike wonder when he learns something new, and he can't help still getting excited by fire. It's just really really cool. 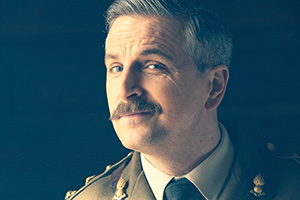 A cantankerous and reactionary WWII army captain who served at the old house during its wartime use as a military base. He thinks of the other ghosts as being under his command, which is in no way the case, thereby thwarting his every attempt to instil discipline.

When the Captain isn't catching up on his newly discovered and beloved war documentaries, he tries to create the type of order in the house that he strived for in the war - a largely fruitless aim, but one that seems to give his life (death) meaning. 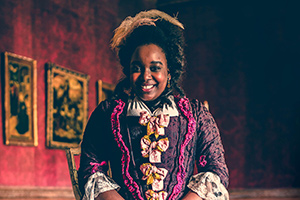 Full of unwavering joy and optimism, Kitty will get excited at just about anything. She's adorable and well-spoken, but not the sharpest tool in the box - the sort of person who'd gladly sharpen your axe for you before you cut her head off.

She is utterly absent of any bitterness towards whoever engineered her untimely demise, and likes to see the good in everyone (even Julian, at a push).

Quick to display her accomplishments in singing despite never being asked to, Kitty faces every day like it might be her last... when, in truth, that ship has long since sailed. She easily gets swept up in the romance of even the tamest situations, but her joie de vivre and total lack of cynicism can be tedious for the other ghosts, and now more recently for Alison, whom she idolises. 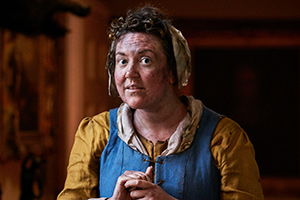 It is unclear whether Mary is an actual witch or merely a perfectly normal 17th century woman who said something that upset a village elder and ended up being burnt at the stake. Either way, she is certainly a font of knowledge (slash paranoia) when it comes to folklore, tradition and questionable herbal remedies.

A simple soul who struggles slightly with the modern vernacular, Mary has tried to make the best of her tragic situation, spreading her expertise in rural crafts. However, she also has the sort of PTSD and passive aggression you might expect from someone who was burnt alive and does not respond well to 'no smoking in here' type jokes. But then it has only been 370 years, and you have to give these things time... 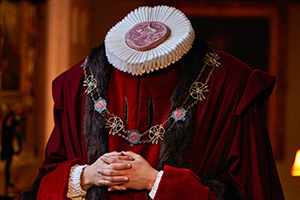 Beheaded under Elizabeth I, Humphrey is not the type to let a little thing like having his head cut off get him down. Breezy and jocular to a fault, he will (literally) laugh his head off at anything - regardless of whether it's appropriate. Thinks he's light relief but is often just salt in the wound.

Loves: a laugh. Hates: his head being used as a football.