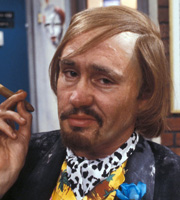 Ralph Filthy is Richie's agent, who profiteers from a string of seedy businesses and dealings, often using his showbiz operations as a cover. He's also an alcoholic and a hypochondriac, often using his illnesses to evade his obligations.

Ralph does very little to help Richie and can often be seen visiting his client's house and helping himself to alcohol. While he seems to almost like Richie and Eddie, it is clear at times that they would each trample over the other quickly to achieve their own ends. 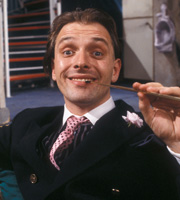 Richie Rich is a minor celebrity who has never really hit the hights of stardom. He has worked on and off as a comedian, game show host, celebrity game show contestant and pantomime star, but is desperately behind the times and certainly not the household name that he would like to be. Part of this is due to the fact that his focus is on telling people how good he is, rather than actually working on his talent.

In spite of this he behaves like a bona-fide star and expects that everyone else will treat him as such. He is tempremental, childish, demanding and cowardly.

Richie has no discernible healthy relationships. Women tend to find him repellent; it is obvious that his family wants little to do with him; and the showbiz community seem embarrassed by him.

Ralph Filthy, his agent, does not seem to mind him, but uses him mostly for his own gain. Meanwhile Eddie Catflap, his minder, has a violent love/hate relationship with Richie. 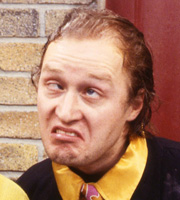 Eddie Catflap is Richie Rich's bodyguard - which is a rather redundant job most of the time as few people know or care who Richie is.

Eddie is base, violent and alcoholic and has a sibling relationship with his employer. He constantly shows disrespect to Richie, even violence, but will gladly help in Richie's schemes and get his boss out of trouble.

By his own admission, Eddie's stupid and rarely the brains of the outfit, but often operates with a clarity and logic that evades Richie - trumping his boss and others around him.