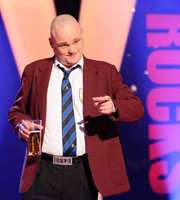 Jason Manford takes to the stage for the fourth show in the current series of Comedy Rocks with Jason Manford as he hosts another show filled with comedy and music entertainment.

Music is provided by house band for the night Jamiroquai and there is a performance from the talented singer-songwriter Rumer.