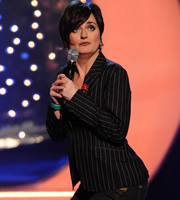 The ever popular Julian Clary goes back to his roots as a stand-up comic, awarding winning Zoe Lyons amuses the audience with her razor sharp wit, and show regular Russell Kane takes to the stage again with more observational humour.

Music is provided by house band for the night McFly, and to top it all off there is a special performance from classical music star Alfie Boe, who performs The Impossible Dream. Little Britain star Matt Lucas was due to join Alfie, but had to pull out of the appearance due to a chest infection. Jason Manford does his best to take Matt's place.